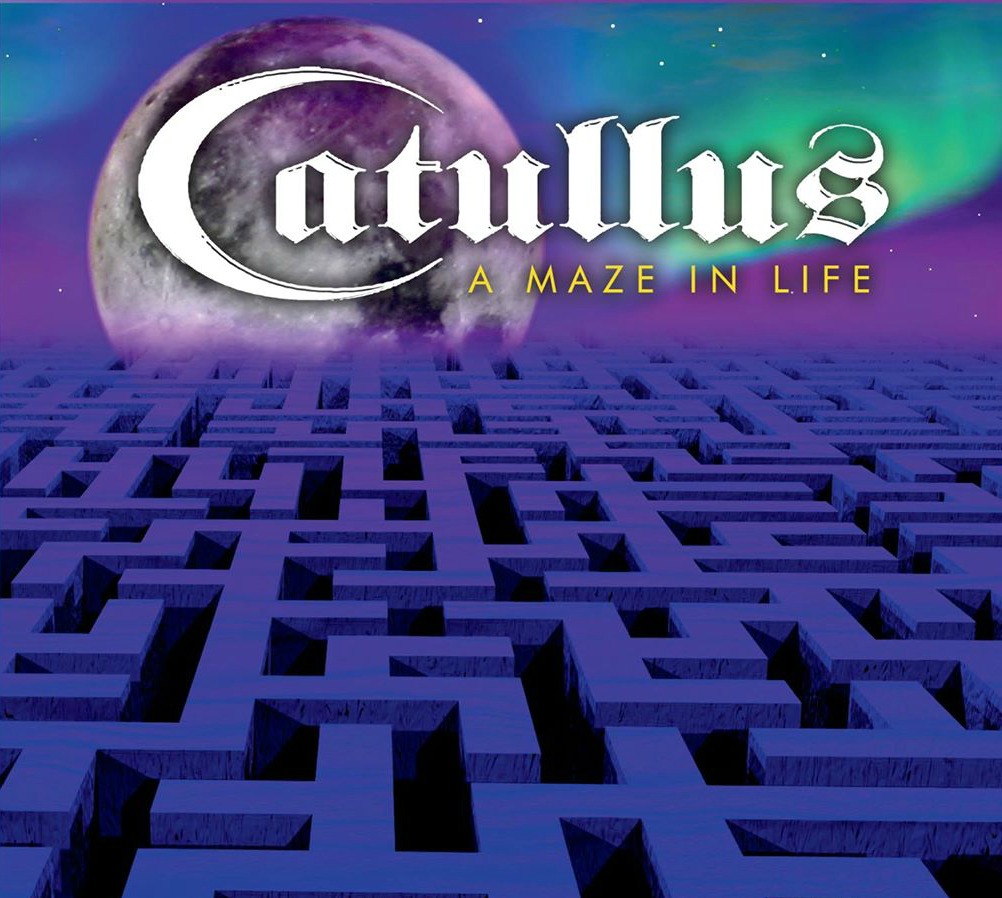 Catullus is an up and coming electronica / fusion jam band, that I was fortunate enough to catch a show of, last month. In a northeastern Pennsylvania jazz club (River Street Jazz Cafe in Plains, PA., USA). They opened up for a band I been really into the last couple years called, Consider The Source. Opportunity came to see them do a live performance, and I jumped. Wasn’t disappointed either. And in the process I became aware of Catullus, who started the show that night.

The club was packed with twenty / thirty year olds. Odds are I was one of the oldest there. Not a bad thing from where I sat. Everyone within eyeshot appeared to be grooving to the sounds the five man group Catullus emitted. While there I was given the band’s debut CD; Catullus – A Maze In Life. Having manners, I said; “thanks.” Being given product happens rather frequently. It’s appreciated because I need subjects to write about. Used my standard line; “will listen, and should I feel inspired, might try writing a few words about it in the near future.” Flip side of saying this would be that the vibe just wasn’t there for me, and it ends up I can’t write a damn good about what I heard.” My job isn’t to hate on shit. Yet, I have to be real. I have a formula I follow when it comes to my writing. The most important thing that has to happen, is I got to feel inspired. No spark … time to move on. In the case of Catullus, it’s hard not to dig them. Especially after seeing the group do some of the eight tracks that help launch this, their first studio project, onto the professional music scene.

Starts off with an almost seven instrumental called; Eric Lindros’d. An upbeat keyboard driven song. Reminds me some of the nineties band, Apollo 440. The tunes a mix of rock / jazz. Very tight! Again, is keyboard heavy! Leading the charge, keyboardist; Justin “Carl” Minnick. This dude can play! Is brilliant all over this record.

Track two is the title number, A Maze In Life. More a jazzy number. At least in parts. Contains singing. I believe the whole band helps with vocals, except for the drummer. Too busy banging on things I reckon. Does a good job at it also. The name of the man behind the kit; Michael “Spawn” Fazekas. That’s how it reads on the official Catullus Facebook page. And along with Chris “Lenny” Bailey on bass, the two seem to handle whatever style music is being played. A very flexible rhythm section. As is in any band, makes for a solid group foundation. But wait! This gets better. I love bands that have in their personal, a full time percussionist. And this band does; Anthony “Dino” Zinno. His sound adds a cool layer, to an already mostly upbeat, and from what I witnessed first hand, danceable sound.

Next it will sound like I’m tripping. Song number three on ‘A Maze In Life’ is possibly my favorite, and it’s in a reggae vein. Yet it changes over to some of the coolest modern prog I heard in a while. Real get up and go type stuff. The bands tight. The ladies in the crowd can’t not move their hips. Same with most dudes. As a writer it’s my duty to sit in the corner and get drunk. Too old for just about anything else. The songs called; Electric Lemonade, and before you know it’s back to Bob Marley land. Longest song on the CD, coming in at a little over eight minutes. Nice job fellas!

So you like the electric guitar do you? Next comes another tune the ladies can wiggle their middle parts too; Jelly Bender. A standout song for guitarist, Andrew “Bert” Meehan. Seems comfortable in whatever musical flovor the rest of the gang is participating in. Could be heard singing in this number also. Jelly Bender to me is a mix of something you’d hear in dance clubs to what one would expect at a prog-rock concert. Throughtout this debut album, the band displays an awareness of jelling together. The jams (instrumental moments) are well written, and executed. The vocals are presented well, and when needed. Consistent behaviour when it comes to the human voice, from the first track to the last. Those who know me, are aware of my love for instrumental music. Especially one that’s upbeat. I can handle it here. Sevevty five / twenty five in my favor.

The closing number, ‘Shugaboof’ an instrumental with a serious jazz / rock vibe to it. Infectious keyboards! This is the shit! As the same with any of the other songs on here, it’s worth many repeat plays, be it at the club, or home in the bedroom.

Using a one to five star rating system, whereas one star means hopefully someone besides their family is buying their music, to five stars which means it’s cool to stave and not buy food for a day, just so you can claim ownership of such a terrific record, Uncle G gives Catullus – A Maze In Life … 5 stars!

This band is going to spoil it for every other band I hear that says they are from the PA area. They are going to have to be extra good, just to even get my attention. Am glad to be able to get on the Catullus bandwagon early. Am interested in what their five year plan is. Main reason, because I expect plenty of good music out of them. I’m very impressed! Full speed ahead guys. For the road ahead shows much promise.

Shout Out: I enjoy the overall sound of the disc. Credit(s): Recorded at Red Planet Studios, Clifton Heights, PA. / Engineer – Joe Smiley / Mixed and Mastered by Paul Hammond at The Spot at O.C.I. Good job y’all !