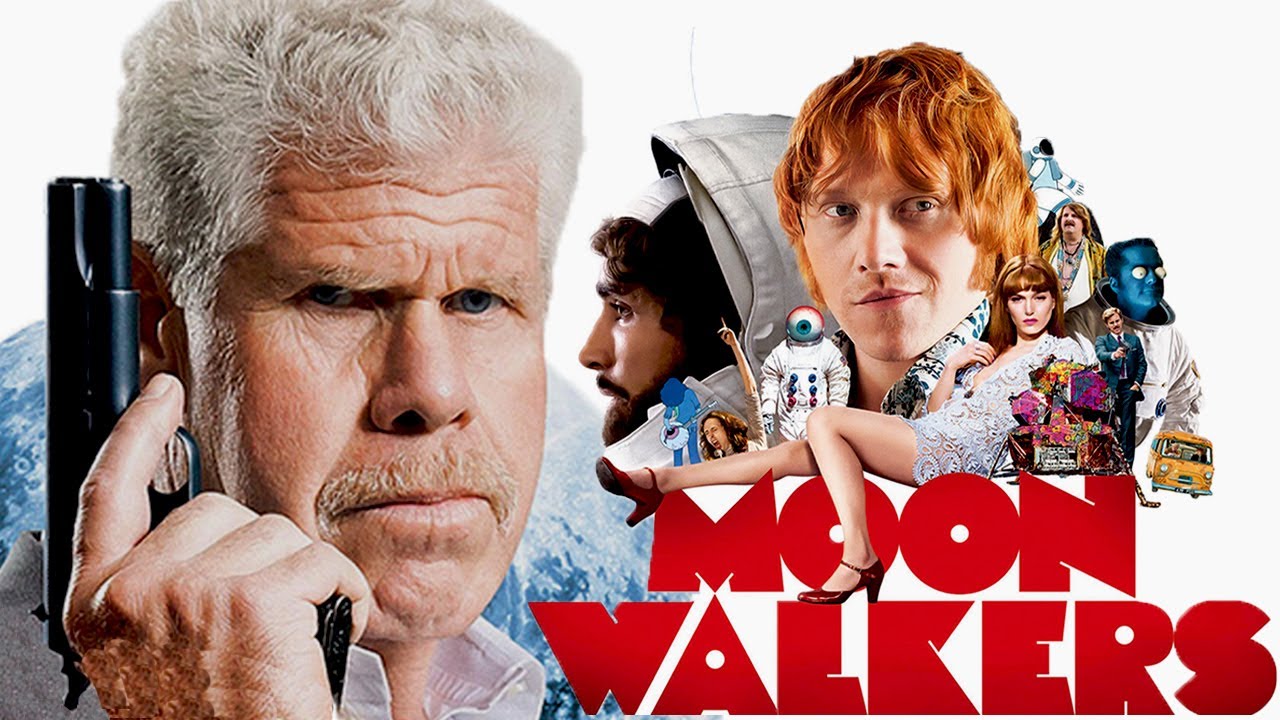 If I’m into the subject matter, and it’s a well written story, I tend to enjoy a good period piece film. In a way, it’s the closest thing we have to a machine that can go back in time, where we can actually see events unfold for ourselves. Researched thoroughly, it’s contents can not only be entertaining but a learning experience as well. Unless if based on a conspiracy theory, then all bets are off. And this is where the film, Moonwalkers, comes in. The premise is that the American Government had a Plan B just in case the 1969 Apollo Eleven mission was not successful landing on the Earth’s only natural satellite.

Debuted in 2015, and released to the masses in the beginning of 2016, the indie comedy ‘Moonwalkers’ which goes back in time to June of 1969, marks the directorial debut of France’s Antoine Bardou-Jacquet. Written by English writer Dean Craig. Stars American actor Ron Perlman, Irish actor Robert Sheehan, and from the mega-successful Harry Potter motion pictures, British actor Rupert Grint. Together helping create a well-made film, that’s I’m sure any viewer who sees it, won’t forget for a long time. Let me elaborate.

As soon as I put the Blu-ray disc in, and pressed the play button on the remote, Moonwalkers had my attention. Two things. The introduction of Ron Perlman’s character Kidman, and the trippy animated opening titles. That’s all it took. Check it out. When viewing, the credits look for the caricature of President Nixon. Here’s just one of many laugh out loud moments.

The next scene takes place in the States and is set just ten days before the United States Apollo Eleven mission is scheduled to land on the Moon. Here it’s established in a top-secret military meeting that Kidman has just returned from doing three years in Vietnam (Special Ops). Before this scene, we have witnessed he’s strung out, suffering flashbacks that involve seeing spooky hallucinations, and that he also is racked with high anxiety. Facts he’s not openly elaborating on. Yet the government thinks he’s the right man for the job. His new assignment is to go to London, England, seek out famous film director Stanley Kubrick, and persuade him with a briefcase full of cash, to secretly make a movie of a successful Apollo 11 moon landing. This would also include, of course, getting out of the lunar module, and walking around on the surface. Footage that could be used just in case the real mission screws up, in which the odds of actually doing so, according to those giving orders to Kidman, are better than the odds of the mission succeeding. As I said, ten days. Sounds simple enough. What could go wrong? In this cinematic farce, the answer to that question would be; everything. Take my word, it’s really fun watching the events unfold from here.

As I already stated, Moonwalkers is a comedy. An adult comedy that is. It contains cursing, consumption of alcohol, cigarette smoking, and drug use, but nothing really super hardcore, or anything I didn’t do back in the 1970’s myself. Except for opium. If around, I suppose I would have done that too. Oh, and I wasn’t into huffing. Not my thing. I once, saw a female do that, and then shortly thereafter proceed to piss herself. Speaking for myself, when it comes to urination, I’d rather use the toilet, or go outdoors. Meaning, not in my pants.

Did I say anything about the cocaine use? Well maybe the drug play is kind of hardcore? No one really dies or anything as a result. There is a nose bleed scene, as a result from snorting blow. Keep in mind, this is a period piece on the late nineteen sixties. So whatever is depicted, is a reflection of the time. Some funny scenes involving CIA Agent Kidman and drugs, but I don’t want to get too far ahead of myself. Add some heavy comic-book violence, and then some nudity sprinkled in here and there for good measure. Nothing really graphic. Remember, in this decade not only was their rampant drug experimentation, but there was a sexual revolution going on as well.

Once in London, we are introduced to a bottom of the barrel rock n’ roll manager, named Jonny Thorpe. Portrayed by twenty something year old actor, Rupert Grint. His character is barely getting by. For the last three years he’s been managing a rock band who call themselves, The Yellow Blackguards. Things up to this point, have not gone well. Matter of fact, instead of making money, Jonny’s borrowing money from a loan shark (Ironmonger) to keep the group afloat.

With things continuing to not work out, this situation goes from being bad, to even worse. Adding insult to injury, the band now holds Jonny accountable for their lack of prosperity, and threatens to fire him. Really more than it is Jonny’s fault, critically speaking the blame really lies within themselves, and squarely focuses on the group’s lead singer/songwriter, Glen. His live performance borders on the obscene, as do his lyrics and song titles such as ‘Grandma’s Nipples.’ Next comes Glen’s demands to be able to record a rock opera. Which is borderline absurd. Motivated by not wanting to be unemployed, and have to sink to complete and utter failure, Jonny refuses to give up. And let’s not forget, The Ironmonger. Just hearing the name spoken aloud, frightens people. An undesirable who has a reputation for having hired thugs cut off body parts if not paid back promptly. And Jonny’s loan is now due.

Trying to come up with the cash to pay that back, Jonny goes to a cousin, with whom he thinks he could get some help. After being laughed at and ridiculed, that idea seems a bad one. Until Jonny meets Kidman. He’s now in London, seeking out Stanley Kubrick, and by accident runs into Jonny, who quickly comprehends Kidman to be an American idiot, and an easy mark. But when over, what Jonny mistakenly concludes to be a brilliant con, with help from his best mate Leon (Robert Sheehan), whose life revolves around being wasted, turns out to be nothing of the sort. For it seems Leon forgot to mention one thing. That the one they swindled out of a briefcase full of cash, isn’t really who he initially said he was. Truth is he’s a CIA Agent. Surprise!

Now I hate when doing these reviews / write-ups to give away the whole story. Cutting to the chase, there is no Stanley Kubrick. Story goes he’s away from London doing promo for what was then his newest masterpiece, 2001: A Space Odyssey. The film gave the United States government the idea that an idea like this, could work to start with. But it’s OK because once Kidman catches up with Jonny, the at wit’s end manager states he knows another movie maker, whose name is Renatus (portrayed by Tom Audenaert), that could pull this off. An avant-garde out of this world type director, who surrounds himself with a harem of pretty women, and an assortment of talented / hippie-type young people. From here till the movie’s conclusion, a continual amusing tale that even the most hardened conspiracy theorist should be able to smile at.

Using the ten star rating system that the IMDb uses, whereas one star means it’s dreadful, to ten stars which means it’s the best one could hope for, I rate the Antoine Bardou-Jacquet motion picture Moonwalkers … 10 stars! It sucked me in from the very beginning, and kept me entertained all throughout. Isn’t that what a ten star rating should be? It was a solid story, that along with being amusing, was filmed very well, never boring me in the process. Excellent special effects also. Watching it twice, I feel as if I certainly got my money’s worth. Which by the way, it was a Netflix rental. Cool bonus features included with the disc. Kept me glued to the TV for hours.