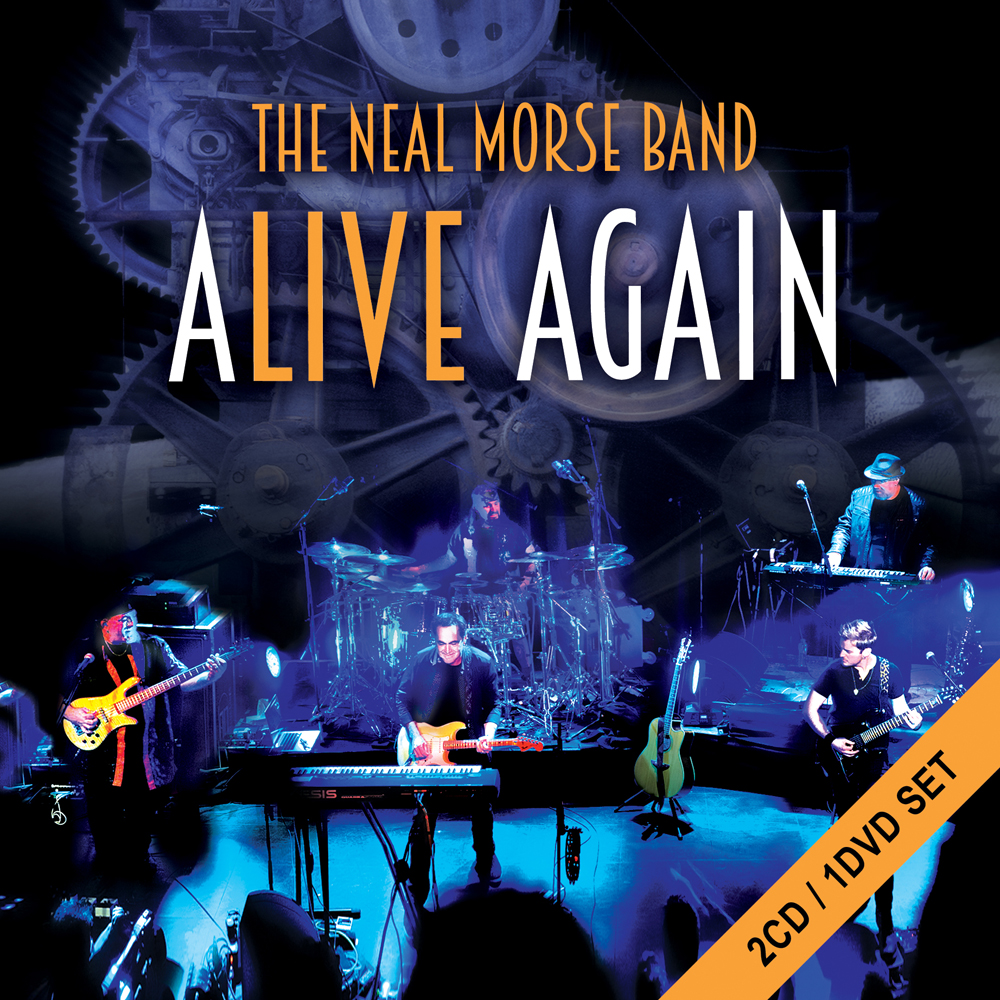 The house lights fade. Full focus is now on the stage. Instrumental music (Alive Again Intro) plays. The sold out crowd at Concert Hall Boerjerij, in the Netherlands, springs to its feet. Loud cheers and applause follow. For they know what’s next. For in their immediate future, one of the most talented / tightest progressive rock bands in today’s current music scene, will entertain and dazzle them for the evening. And that they do. Ladies and Gentleman, may I introduce; The Neal Morse Band. In concert, promoting their newest studio creation; The Neal Morse Band – The Grand Experiment (2015).

The Neal Morse Band hails from the United States. It’s namesake, a multi-instrumentalist, songwriter whose attention level rose with a progressive rock band he was co-founder in called; Spock’s Beard. I became aware of them after their second studio release called, Spock’s Beard – Beware Of Darkness (1997). One of those albums you play once, and then give repeat plays for the next two weeks. Maybe it was longer? Their debut album called, The Light, is the same way. A prog-rock masterpiece! I got to see the band perform at ProgFest ’97 in Los Angeles, California. Totally mind blowing! Long live the bearded ones!

On drums for The Neal Morse Band is former Dream Theater personal; Mike Portnoy. Like Neal Morse, I became aware of Mike and Dream Theater, quite early on. When their second studio album, Images And Words (1992) was brand new as a matter of fact. A friend turned me on to them, one late evening. I have stayed a follower ever since. I honestly can’t say I dig their music as much now that Mike isn’t a part of the band anymore. No disrespect to his replacement, Mike Mangini. Different direction / vibe nowadays. I dropped a twenty of their latest studio, Dream Theater – The Astonishing (2016). Here’s my three word review; “It’s total rubbish!”

Establishing that I know Neal and Mike’s previous work, I can say the same isn’t with the other musicians who finish making up the Neal Morse Band. Wish it was, for this live recording put each of these musicians on my radar; Randy George (bass, and backing vocals), Eric Gillette (lead guitar, and vocals), and Bill Hubauer(keyboards, and vocals). All three after hearing / witnessing for myself by watching the accompanying DVD, extremely talented multi-instrumentalist. And they can sing. Along with Neal and Mike, some beautiful harmonies. Professional musicians of this caliber, needed if playing alongside Neal Morse, and Mike Portnoy. In my opinion, these two have been at the top of their game since first entering the music business. Someone like myself might not dig everything these guys have participated in. The range here with these two players goes from Death Metal to Christian, and all in between. Both Neal and Mike, both having big catalogs of work to show for themselves. I’ll quickly state that this here new two audio disc / one DVD release entitled, The Neal Morse Band – Alive Again, should be a crowning achievement for all involved. A nice new addition to the previous achievements of yesteryear.

First off, on disc one, out of eight tracks, I am only familiar with one song. That would be a Spock’s Beard tune called; Harm’s Way. Brilliantly performed here by the way. The other seven numbers, were brand new to me. Two songs from the group’s newest (2015) studio effort; The Neal Morse Band – The Grand Experiment. The five left, all from Neal’s solo catalog. My favorite, a song Neal performs on his own called; There Is Nothing God Can’t Change. Shocking in a way I’d pick this, when taking into account all the fine material disc one of Alive Again, has to offer. It’s a song Neal performs by himself. He sings, accompanied by an acoustic guitar. A story song, that Neal introduces by saying all stories told, were true. It’s an out and out Christian number. The lyrics pass along several difficult situations. A blink from death. The Grim Reaper turning the last corner to it’s destination. And then things are OK. People believed. A song filled with strong emotion that I as a person, have always had a hard time dealing with. With yours truly, I’m either happy, or pissed off. And if around me, watch the latter of the two. This song, There Is Nothing God Can’t Change, touched my heart. Nice something can. Worth mentioning.

The second audio disc again includes two helpings of the groups super proggy album, The Grand Experiment. The studio has five tracks, (not including bonus tracks) and this live offering, giving forth four of the five. Enough for me to conclude that I need to add The Neal Morse Band – The Grand Experiment to my collection. Seeing how it’s missing only one song, might as well as the studio, right? Besides, I have been kind of slack in buying Neal’s stuff lately. The last CD I got of his, and totally fell into it, came out back in 2005, called; Question / Questionmark. Included Mike Portnoy, and Randy George of this band. Track five of that album (In The Fire) is performed flawlessly here, at the Netherlands, 06 March 2015 concert. Trust me … ? (the name of the album) is another Neal Morse must have!

I’m not fond of labels, but if I had to describe what I hearing / seeing, I would say the Neal Morse Band, as a whole is a hard rocking / modern day prog-rock band. As talented as any other out there. The lyrics can sometimes push it towards the land of Christianity. While mention of God, there is no real preaching anywhere on the two disc recording. Lyrics can be inspirational. As a real representation of Neal’s musical career, The Neal Morse Band – Alive Again, covers Neal’s past. From the last studio album which not only did Neal have a hand in writing, but the rest of the band as well. To his involvement in Spock’s Beard to his new life journey as a born again Christian. The results, a glorious set list. A collection of sounds and thoughts that don’t insult your intelligence. The Neal Morse Band – Alive Again, represents Neal, then and now.

Musically, there are times on this two disc live recording, where this band totally smokes. When there is no holding back Mike Portnoy. Which to me, is a good thing. Neal certainly rocks at times. Complimenting those two, three players, continually making their contributions known. What’s nice here, is that there is plenty of room given to see Randy, Eric, and Bill each shine as not only a solid member of the band, but then on their own. For the band members solos found on Alive Again, are not only for getting up, relieving oneself, and getting another beer. Simply not the case here. Besides one can do all that either before or after the performance. Of course the listener / viewer can hit the pause button. Near blasphemy in my eyes. Each second, of each minute, of each track, deserves full attention. Stopping and starting, as annoying as listening to an old eight track tape. Click Click (insert scream).

Using the five star rating system, whereas one star means it’s should be condemned to Hell, to five stars which can be interpreted as being a personal slice of Heaven right here on Earth, Uncle G rates The Neal Morse Band – Alive Again … 5 stars! I’m more into progressive rock than I am the other forms of music that have been mentioned here. This double CD / DVD is full of prog-rock, at it’s finest. Performed by one of the most solid five member prog-rock groups, on this planet. It’s been watching (twice) the DVD that really pushed my appreciation level up a notch. If you have not witnessed their performance yourself, the DVD demonstrates all I’m saying, plus more. Filmed beautifully by the way.

In closing, when time permits, I’ll next dig into the catalogs of each member, for anything I don’t know about, or may have missed. And like I said, I’m going to secure the album, that the group was touring behind; The Neal Morse Band – The Grand Experiment. How could I not? Besides, I imagine it would go with ‘Alive Again’ just PERFECTLY!