“Uncle G” Gets A Night Out

So the first concert I attend in 2016, ends up being a band that I first found out about last year; Consider The Source.

As a result of some of the writing I do for ClassicRockRadio.co.uk, I get free music CD’s and whatever else sent to me throughout the year from various record labels, etc.. Can be useful at times. With the type of writing I do for the station, in part, I need new musical releases to write about on a pretty consistent basis. So I see all the CD’s/DVD’s that I receive as potential subjects to write about. Impossible to do stories on everything sent my way. I am sure those who pack the padded envelopes, realize that. For sure, nothing goes unlooked at. All appreciated. The fact of the matter is, I do actually spotlight some.

I woke up this past Friday morning the 26th, telling myself it was time I got my feet wet in Pennsylvania, and dive into the PA music scene. For the past thirty years, the majority of the shows I have attended was in Texas. Seeing a show in PA would be a new experience for me. And it was! Let me elaborate.

First off I like to thank Bryan the Red Cab (actual color of the taxi) Driver for getting me safely, to the gig, and back home. Around my age, he told me he’s been a taxi driver on and off for a considerable long time. Having done so myself decades ago, I concluded Bryan’s really good at it. Knows northeastern PA., like the back of his hand. Could tell you how many bars/taverns each small town that made up that part of the state had. Cool guy! I’d certainly use his services again. Not having a car sucks! The reason for that…another story for another day.

The River Street Jazz Cafe, where I saw not one, but two high energy fusion bands inspired by various backgrounds, do live sets, really had their act together. I wish I remember the waitress’s name who attended to me throughout the evening. I really appreciate how she made sure I didn’t starve or dehydrate, the whole evening. Very reasonable prices at the River Street Jazz Cafe. The french fries were cooked to perfection, and the beer I choose for the evening, Guinness on draft, was cold and tasty. Just right! The jazz club itself was cozy, yet sized perfectly for the evening. Attentive employees, and a good looking crowd whose age on the average was 20’s/30’s.

A small handful of us older dudes sprinkled around. Bet we had one thing in common, and it wasn’t that we all wore dentures. That would have been only me? Shit fuck! My first night ever wearing them out. I should have known better. What a fucking disaster!!! Frankly, I don’t know how I survived the whole evening wearing them. Well, wait, beer could have helped? I could barely talk. Thanks to all for trying to understand what I was trying to say throughout the evening. Unbeknownst to them, as if not bad enough, I’d gag if I said too much. Hindsight should have practiced speaking more at home before going out in public with them. Had to be done sooner or later. Hopefully easier for me as time marches on. Regardless of my disability, I met some people. Everyone I encountered was cool !! One guy I met was named Daniel. As we bullshit some, he’d tell me about his recording studio; The Studio At The Spot. Said he also had plans for opening up other new businesses; head shop, and a tattoo parlor. I enjoyed our conversation and when parting company wished him luck with his ongoing/future business ventures.

I talked to those associated with the Pennsylvania group Catullus while the band played their set. I was given their debut CD, released this year; Catullus – A Maze In Life. FYI … I’m listening to it now for the first time while typing this. I’m impressed enough that I already decided to do a write up on it. Advanced notice. Probably sometime this March.

The music group Catullus describes themselves to me as an electronica jam band. And jam (includes extended instrumental segments) they did the evening of the 26th at The River Street Jazz Cafe. While doing so, the packed crowd was animated, with much dancing during Catullus’ time on stage, while others like myself, simply enjoyed the party like atmosphere their music created. Looking around, the crowd just ate it up!

Electronica YES, but not done so in a way where it becomes redundant. That’s where I draw the line. It makes me lose interest. Hate when that happens. Like most, I can only usually take so much of even a good thing. ‘Catullus’ knows how to ride a melody, and keep it interesting. And here’s a clue as to how they do it. A super tight rhythm section consisting of a full time percussionist (Anthony Zinno), a rather energetic drummer (Michael Fazekas ), and a bass player named Chris Bailey, who was spot on the entire performance. Add the well placed guitar sounds of Andrew Meehan. Next, the keyboard playing of Justin Minnick. This dude knows what he’s doing! I was impressed right off the bat with his timing and different use of synth sounds. Seems to know how to fit in, and not so much stand out. Justin’s playing complements the band’s sound for sure. He gives it a lot of its get up and go. Now add the final ingredient, being the vocals. Not excessive, and kind of to the point. More like a treat, than the main course. A somewhat group effort which is refreshing. 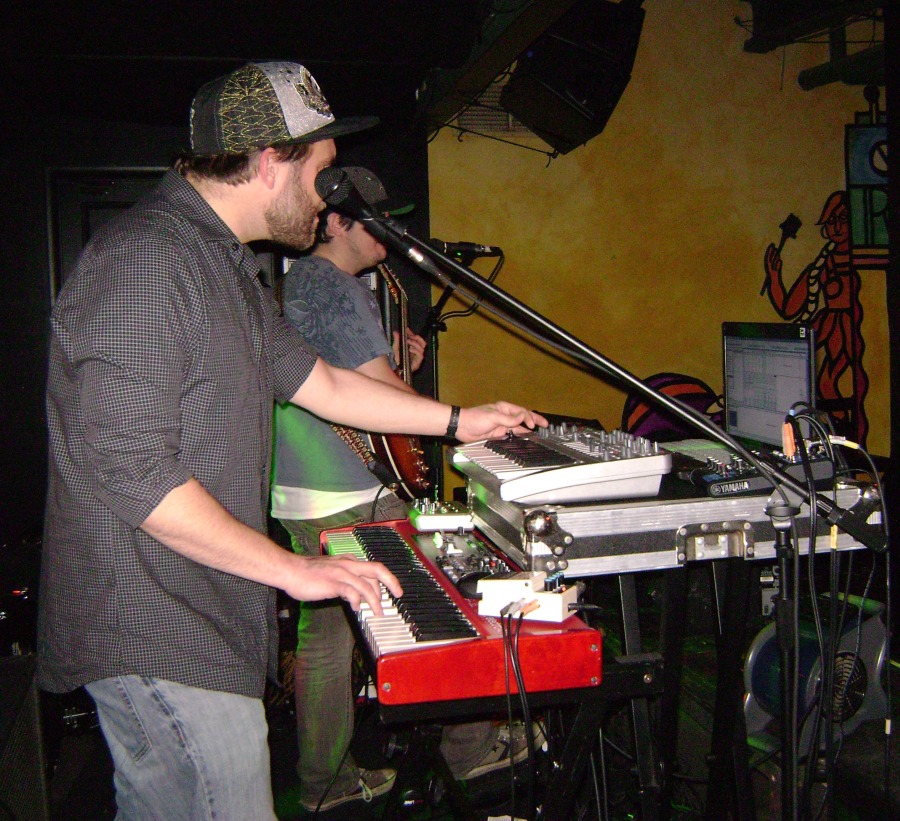 Next up was the headline act; Consider The Source.

Here was the reason why I paid Bryan the Red Cab Driver, all the money I did. The performance Consider The Source made it worth every penny spent. Especially considering how I was given the World War Trio CDs; reviewers copies. Plus, now the new download that the band is giving away to celebrate a milestone of CTS being together a whole decade. Back in the day, and I’m old enough to remember, a band might last five or so years, and then GONE. Musicians having moved on to greener pastures. Being together ten whole years is an accomplishment, and should be celebrated. Their gift to their loyal fanbase is called, Consider The Source – Past is Prologue: 2005-2015. A compilation album spanning the history of their ten years and counting career. Includes cuts from all of our studio albums, including a bonus track from our untitled EP released in 2005. I HIGHLY encourage the time downloading/sampling. For myself, half the album’s new material to ME. It took me some time to discover these guys. So the FREE download is perfect for me. It’ll make a cool burn/car CD. Really nice when I actually have another car. Whoever said going through a divorce was easy? 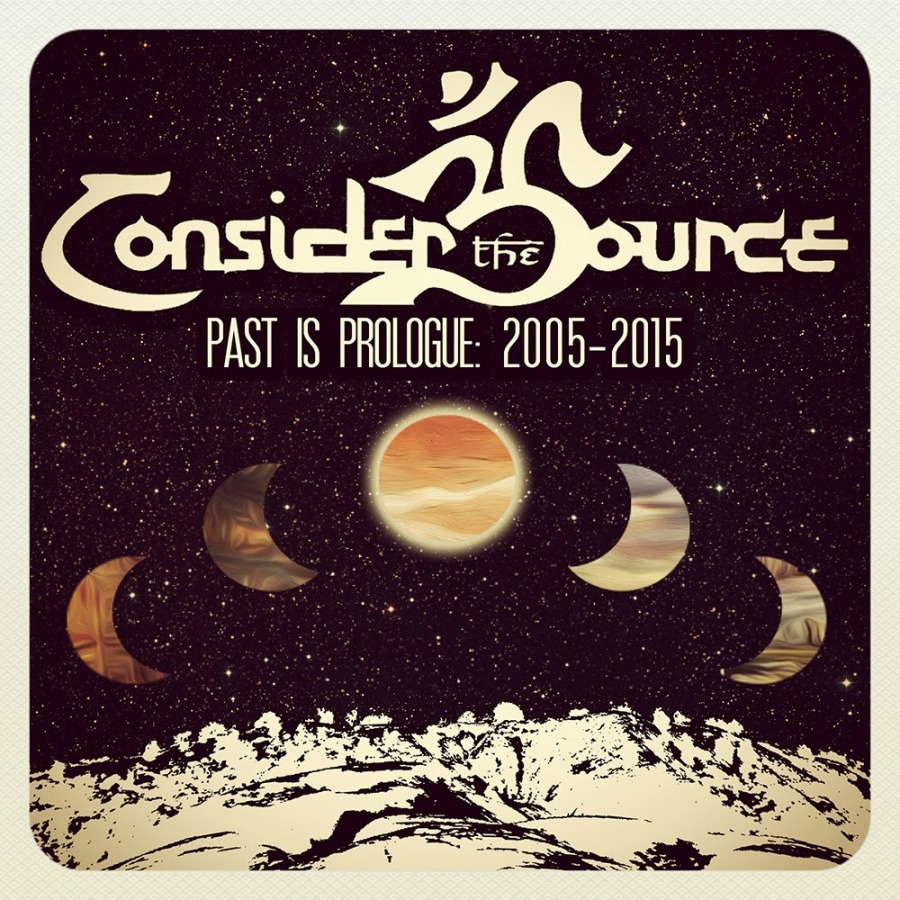 Aquarians (World War Trio Part II), the first offering on this very cool give-away, is very matter of factly, the song they started off the concert with. When finished setting up, the trio just started to play. And it was this song, Aquarians, that they started with. Beginning to end, a very lively set! Shades of progressive/hard rock throughout. The crowd was deeply into it. I talked with fans in the audience that had seen Consider The Source multiple times already. A young man in his twenties sitting next to me with a group of friends told me he saw the group four times before. Once Consider The Source hit the stage, this guy was out of his chair, and heading towards the stage.

Consider The Source is: 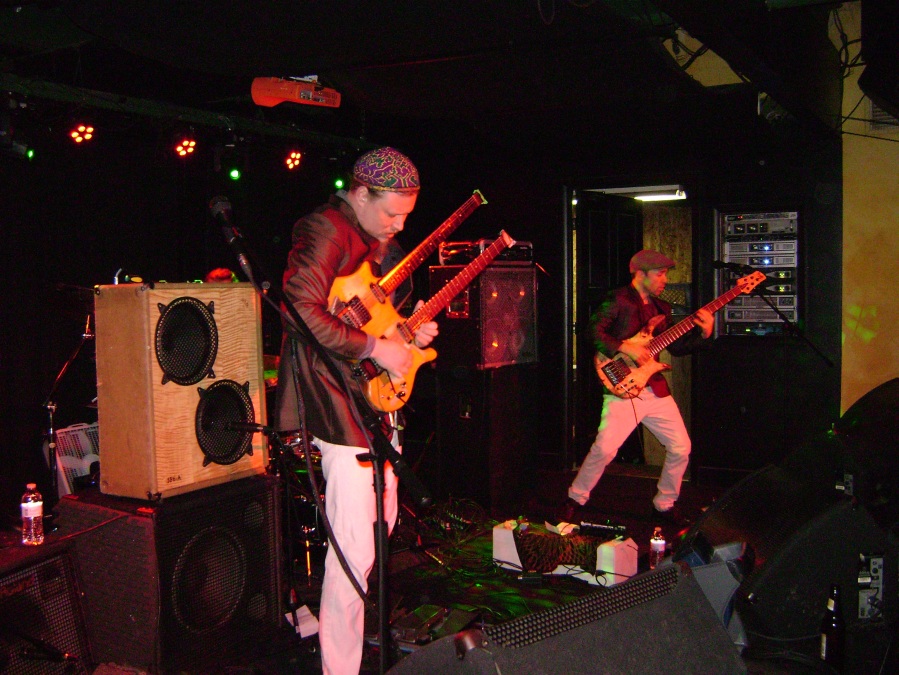 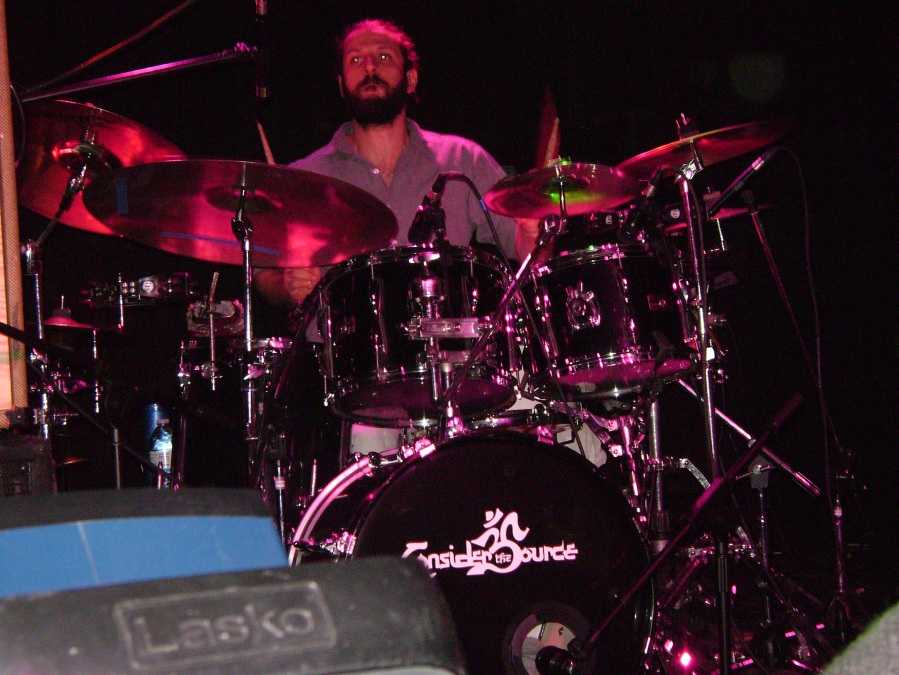 This was a very high-powered performance. All three musicians that made up Consider The Source, one as equally good a player as the other. I personally, one who’s been into rock n’ roll since the 1960s, can’t be any more impressed with the musicianship of all three of them. Capable of not only performing well but motivating and inspiring others as well. Meeting fans after their performance, I observed the guys were as professional off stage as they were on. A favorite moment for me was when this pretty young lady walked up to Consider The Source’s bass player John Ferrara, after Consider The Source had finished their performance and told him in all sincerity that he and his band were; “The Shit!” Looking at her, I quickly concluded that she reserved this high praise for those things in her life that must have been truly outstanding. The comment made John smile, and say ‘thank you’. I’m sure he’d heard that before. But my personal favorite female in the audience was this chick who danced with a hula hoop. Picture this. ‘Consider The Source’ be on stage doing their thing, and she’d be in the back of the crowd, getting into the music, and looking all cool dancing around with her rather large plastic hoop. Confused me some, cause being a newly single guy and all, I wasn’t sure what I wanted to look at more, the band or her hooping. The answer revealed to me after enjoying the sounds more and drinking more beer; I’d keep my eyeballs on both.

Aquarians / Many Words of Disapproval / This Dubious Honor / I’ll Fight for the Imp / So Say We All / Abdiel / The Transported Man / A Monument To Compromise.

Summary: I strongly recommend checking out / supporting both bands; Catullus / Consider The Source. Each performance I enjoyed thoroughly. Would luv if ever possible, to catch the same double bill again in the near not so distance future. Catullus and Consider The Source absolutely RULED! A wonderful night at River Street Jazz Cafe, in Plains PA. Looks like I found a new place to visit from time to time. Maybe I’ll see you there (wink wink). 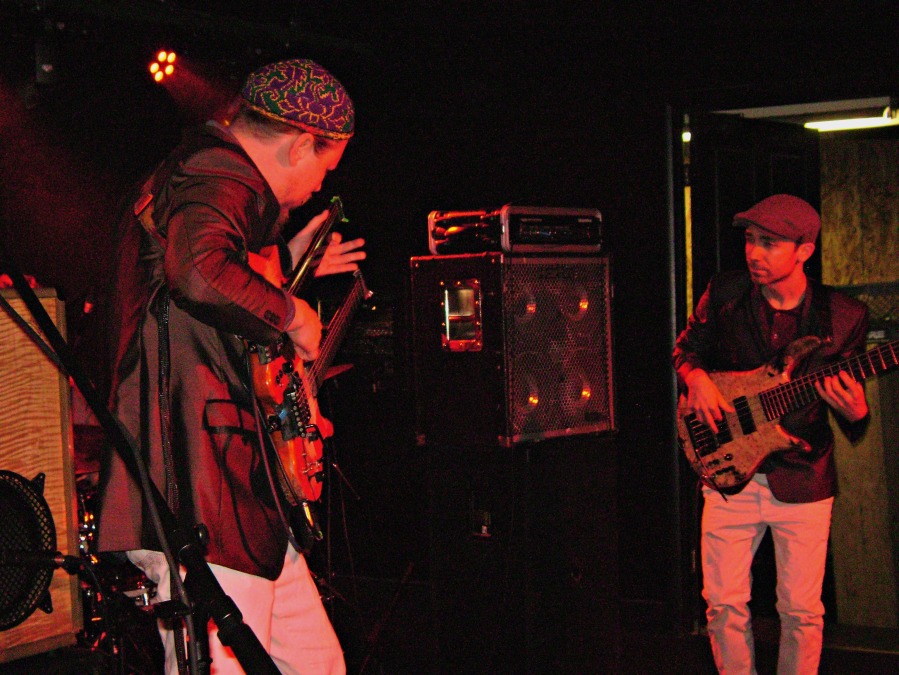 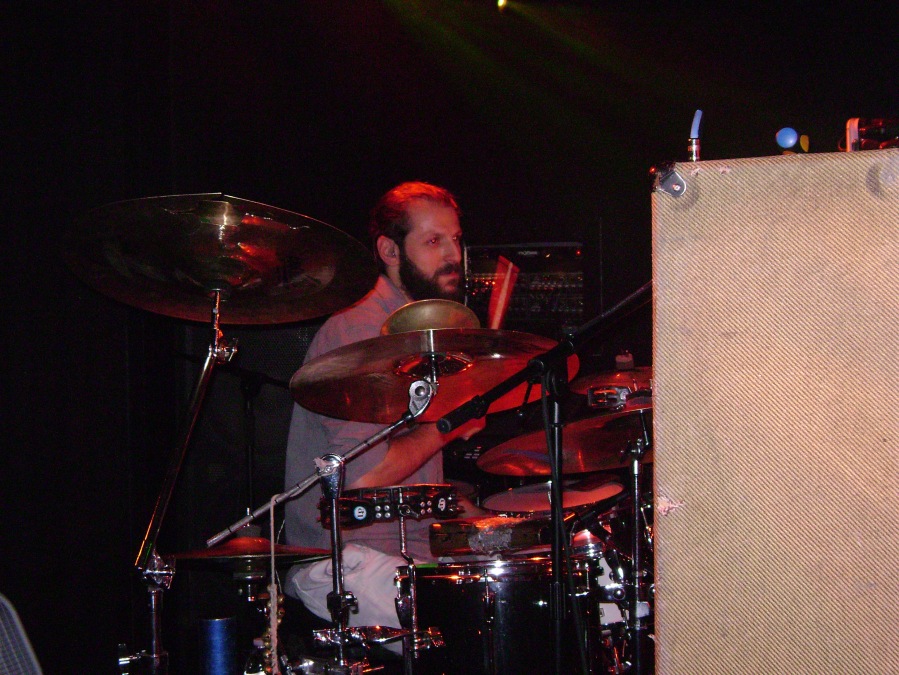 Photo: On the Drums, Consider The Source’s Jeff Mann 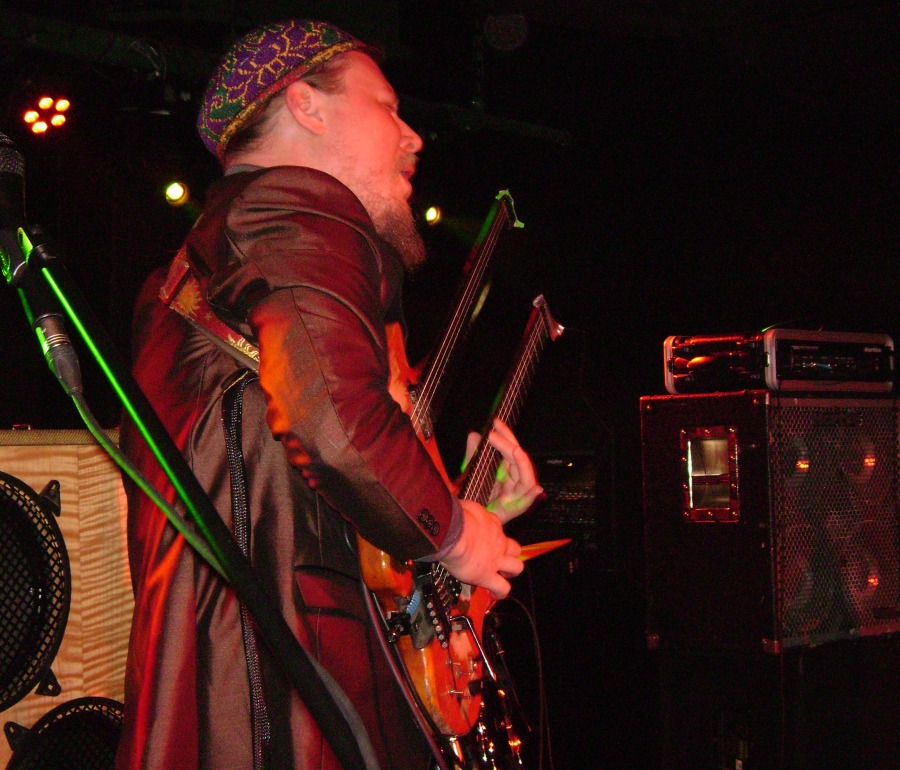