Gong! The sound you hear that starts this musical journey. And believe me, it’s going to be a marvelous one at that. But I’ll warn you, it’s quick. Over before you realize it. A trip thru other space traveling billions of miles, and lasting just under fifty minutes. Filled with outstanding instrumental music, and a few songs with lyrics that’s guaranteed to not let go. Earworm material created on Earth and cast off into outer space heading towards the far reaches of the, Andromeda Galaxy. Past the beautiful dwarf planet Pluto. Onward and outward they go. Thus a well written tale, providing for a well made concept album. Created by a few legends in the music field, along with the help of a sensational crew.

This is the second offering from a crazy good progressive rock/jazz rock/jazz fusion band out of the beautiful country of Japan called; Cymbalic Encounters. The group here on their second studio release has used the same basic formula as their debut, having a main three person nucleus, and then adding more textures to the sound with the help of other competent musicians. Works for me! I gave Cymbalic Encounters debut outing a positive review, as I will this one. And now for the details.

The core of Cymbalic Encounters is three individuals; Mark Murdock (ex Peter Banks Empire), and two gentlemen from one of Jazz Rock/Jazz Fusions best bands of the twentieth century, John Goodsall (guitar) and Percy Jones (bass) from; Brand X. Long time professional musicians with large cult followings. In days gone by, when browsing thru friends’ albums’ collections, one could always tell when they were coming across someone seriously into cool jams, for they would find Brand X albums, along with the Stevie Wonder, Return To Forever, Genesis, Yes, and Pink Floyd ones. Potheads always had the best collections. Figured I’d throw that in.

Located inside the CD booklet that accompanies the Cymbalic Encounters Exploration of the Southern Constellation musical disc , musician/writer/multi-instrumentalist Mark Murdock spins a tale taking the role as Captain, on the cleverly named spaceship; CE2. It’s mission brought forth in eight wonderful tracks that end with a smokin’ number entitled, Trip To Alpha Syntauri. A carefully put together instrumental where Murdock, Goodsall, and Jones provide the finishing touches on yet again, another fine release. For the listener it may seem to end abruptly. A rush of disappointment that it’s vibrant sounds has ended. Don’t panic. Just press the repeat button, and you’ll get to experience the whole CD, all over again.

Cymbalic Encounters – Exploration of the Southern Constellation – a modern day Prog-Rock/Jazz-Rock/Jazz Fusion masterpiece. In my opinion, every song’s solid, and together make for a perfect recording. Destined to be included in many Top 10 ‘Best Of’ lists at the end of the year. Sounds terrific with headphones. The volume isn’t insanely high. Mixed and mastered by Joe Berger, who’s a musician on the project as well.

Besides excellent sound/instrumentation, and equally well composed songs to motivate and compliment the players, David Juteau’s vocals on the three songs with lyrics, are perfect for this venture. Interesting lyrics as well.

Sharing guitar duties on the same album as guitarist John Goodsall must be frightening. Mark’s teenage son Preston Murdock pulls it off very nicely. One example would be a real tasty guitar solo on the album’s introductory song, Magnificent Works. Same can be said for Mark Murdock’s keyboard playing. On board the CE2 is one of Japan’s best composers/keyboard players; Hiroyuki Namba. Awesome retro synths, with a short, cool Keith Emerson vibe thrown in at the end of track 5; Falling Off The Map. Mark’s keys work throughout also compliment, and giving off the proper ambience, so to help the presentation seem more believable. Dude’s already a great drummer. Every layer of sound is important when it’s a concept album. Together they make for one production.

For fans of Mark Murdock, John Goodsall, and Percy Jones, this album does not disappoint. Superb contributions from all three. Percy’s bass work, John’s guitar solos, and Marks drum work simply can’t be beat. It must also be noted the excellent contributions by everyone else. Speaking of, I luv the violin work contributed by Junko Minobe on this.

Rating: Using the one to five rating system, whereas one star means you wasted your hard earned Yen, to five stars meaning it would be an honor and a privilege to have this in one’s personal music collection, “Uncle G” already spilled the beans; 5 STARS!

I‘ll close by saying that there are some music CDs that when I’m done reviewing them, go into my vast collection, and start collecting dust. Next to me when sitting at the home desktop is always a stack of new CDs people would like me to write about. Here’s one new release that instead of being immediately filed away after the review is published, will instead hang out by the home stereo system. Sure I’ll still listen to whatever new comes my way. It’s what I do. Good luck with whatever comes next. Cymbalic Encounters just set a new standard for how good fresh new prog-rock/jazz fusion/instrumental music can be showing that above all, originality and creativity does indeed still exist.

OH…before I sign off. A real nice visual / cover wrap pertaining to the actual Cymbalic Encounters – Exploration of the Southern Constellation physical CD I have. Shipped all the way from Japan undamaged. Double jewel case, with the second disc being a very cool bonus DVD. Includes live material, and a well done video of the song; The Sun In The Night (The Days Will Last Longer). The cover artwork reminds me of the spaceship Jupiter Two from the classic 1960’s television program, Lost In Space. Exceptional Art Design by Jiro Oshima. Accompanying that, well done headshots by professional photographers Emili Muraki and Momoka Ozawa. 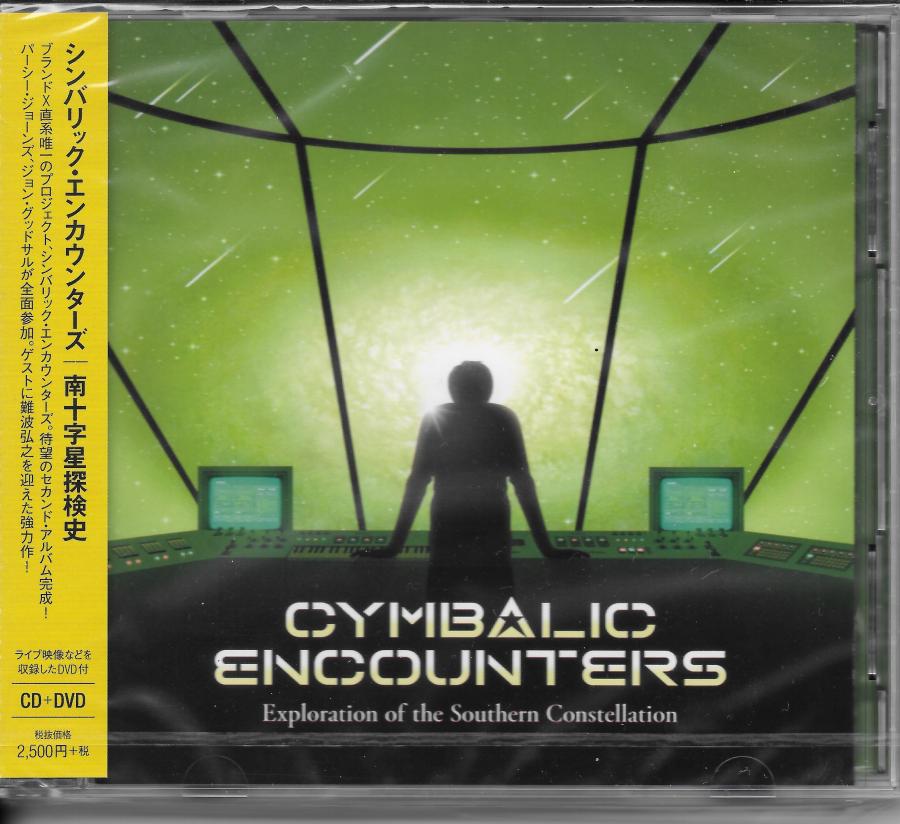