On the United States 237th birthday, my lovely wife and I had the privilege of seeing one of progressive rock’s most respected bands, Nektar. A celebration in a well known Fort Worth, Texas drinking establishment called The Grotto. A solid evening consisting of good vibes all around.

Before their set I had the pleasure of meeting the individual band members of Nektar. All very sociable and entertaining. I first ran into keyboardist Klaus Henatsch, original Nektar member/drummer Ron Howden, and bass player Lux Vibratus outside on the patio of The Grotto. I introduced myself and within seconds it was like we were old friends. It appears they read and collectively liked the review I recently authored on their new CD; Time Machine. So much so that it easily stimulated conversation. Always cool when that happens.

The one I chatted mostly with was Klaus Henatsch. A helluva nice guy! The subjects we chatted about varied ranging from his admiration of jazz keyboardist/pianist Bob James, to today’s music scene. One thing we agreed on was musicians as a rule got more technically advanced the longer they devoted time to their craft. How ridiculous it is for the media in general here in the States to grab onto and worship the younger artists until age twenty five, when it seems they lose interest and go latch onto someone else. Is it a nation’s preoccupation with youth? More so in the world of pop than progressive rock. Their age doesn’t dictate one’s popularity, but instead talent. Still, popularity pays the bills. Common sense thinking between Mr. Henatsch and myself was that a musician’s skills can improve over time, providing that a seriousness and devotion are present.

People sometimes wonder about me. If not a professional musician then what ignites and keeps lit my all too apparent respect and admiration for those who excel within it’s ranks? My background story is but a short one as my Mother was a professional musician. A piano / accordion player. Fell to the dangers of being in a bar every night. Died an alcoholic when I was age seven. Safe to say that’s where I developed my interest in music, and keyboard players. My fondest for instrumental passages from her love for Herb Alpert and the Tijuana Brass. How when I first hear a song that I tend to listen to the music/melody first, before paying any attention to lyrics, if the piece includes words. Needless to say,the band members and yours truly got along fine. On a side note, I also get along well with mechanics.

Honorable Mention: Worth discussion is that for a few minutes I got to chat one and one with Lux Vibratus, Nektar’s bass player from the States/ West Coast Bay Area. First thing I established was I knew who he was. That people I knew saw him perform with Nektar (Cruise To The Edge) and had enjoyed his work. The subject of age came into the conversation when Lux joked that it was discussed with the other members of Nektar about making him appear older-looking so as to blend in more with the overall mature image of the group. Cool to have shared a good laugh.

I made it a point especially before leaving for the evening to say to Ron Howden just how good a drummer I believed him to be. His playing is perfect for Nektar’s blend of different styles and tempos. A drummer’s drummer for he knows exactly when to play, and the volume for which to be heard. I never got the impression watching him behind the kit that the band revolved around him. Some players you do. The Nektar I saw was very much a group effort.

Roye Albrighton was the one I spent the least time with in the band. Just turned out that way. At least now I can say after seeing Nektar’s performance, what a superb performer he is. We did get to chat some at the end of the evening while equipment was being packed up. He discussed his plans already for another tour, and of course coming back to Texas. My hope is for the band to kick off their next tour in another part of the State I call home; my city of residence, Houston. If able to make a wish, I’d ask for a double-billing with another well known prog-band. Promote it properly. Add a cool light presentation. An evening of traditional art rock. Everything starts with an idea. Nektar’s recent performances prove they can still kick ass / entertain as well as they ever did. From here, I’d like to see the momentum keep building. I predict way more good things to come from these classic prog artists. 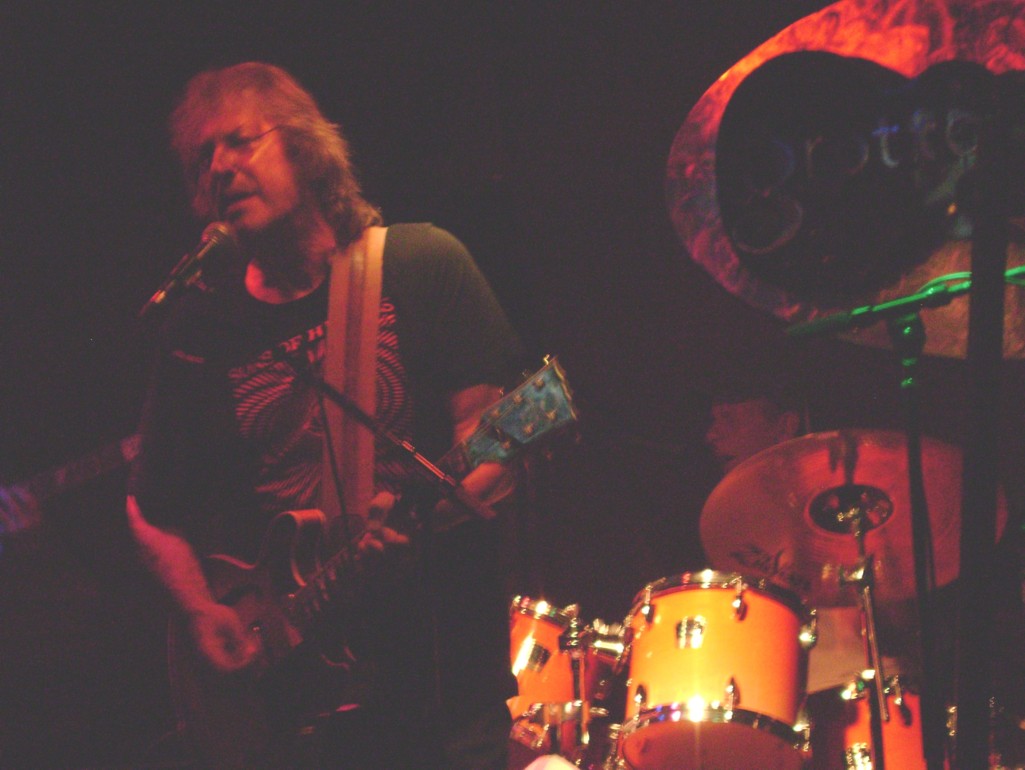 Once Nektar took the stage, they immediately commanded the place. As solid a four piece band you ever want to see. Albrighton’s masterful guitar playing/singing appears effortless. Decades of hard work will do that. Frankly I could have watched Roye play all night if possible. A pleasurable experience viewing listening to Roye’s performance. On a whole, the band dove into its past, while getting the audience current in one of the tightest sets I ever witnessed. The rhythm section was a blast. Such an honor being able to witness such a tight bass/drummer team. To keep up with Howden, a seasoned player, Lux Vibratus just simply does his stuff. Plays almost appearing like he’s in a trance. Both himself and Howden providing a solid foundation to every song.

Klaus Henatsch in concert is a gas. A skilled keyboardist and I hope he doesn’t mind me saying, a bit of a ham. But in a VERY good way. For not only a keyboardist, but an entertainer. The man knows how to make people smile. Was super cool for this reviewer to be so close as to actually watch him in action. Watching a YouTube clip is NOT the same thing as being there. My favorite moment was a real Klaus Henatsch moment. Witnessing him play the title track on the group’s newest studio album,Time Machine. That’s all him playing, for he’s not having to capture/imitate anyone’s past keyboardist parts. By the way, something in which he does brilliantly as well.

Did I say the word album? For sale on the band’s table of goodies were real Nektar albums. Very reasonably priced as well. Since I don’t have a turntable I had to pass, but I did buy a Nektar Tee-shirt and a new (2013) re-issue (Purple Pyramid Records) of a Nektar classic, Journey To The Centre Of The Eye (1971).

We all had a GREAT night out. I’d recommend keeping up with/catching Nektar whenever in the area. The wife and I really dug the band, as did the couple we hung with, the Westbay’s from Grapevine Texas. Long time Internet friends that we both enjoy spending time with when the opportunity arrives.