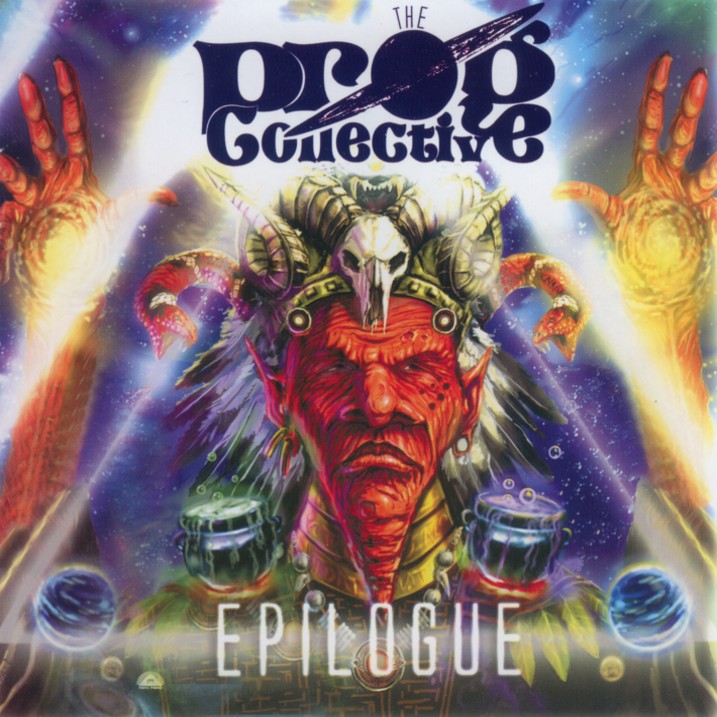 Since arriving in my mailbox, the newest from Billy Sherwood’s The Prog Collective called Epilogue has been occupying all my spare time. I simply fell into it, and have been stuck in all its groovy prog-ness ever since first opening it up.

Like the debut Prog Collective recording, the foundation for this second offering called Epilogue, has been put in place by ex-Yes member Billy Sherwood. A multi-instrumentalist with over twenty years of experience as a professional musician on stage and behind the scenes. I reviewed Billy’s work for Classic Rock Radio (UK) on more than one occasion. My review of the first Prog Collective mentioned something about it being more on the melodic side than being a real rocker. A little time later and the second offering from The Prog Collective comes out called Epilogue. It not only addressed the issue I had but in my ears took my suggestion. For there are enough real rocking out moments included in Epilogue so as to motivate the wiggling of any prog-heads bums should they be so inclined to do so. I am happy about that, for playing rock music, in general, is the reason I started listening to many of the superb players that are included in this fine new release.

The songs here are presented in typical prog-rock style; airy yet meaningful lyrics, long instrumental passages, different time changes, and styles of playing. That, in a nutshell, is, at least to me, what a good definition of what prog-rock is. Yet it’s also way more. Those who admit to being a fan know what I’m talking about. Hard to describe but I do know this. Prog Rock music fans are real music fans. We appreciate more than anything musicians who dedicate themselves to their craft. In prog, that’s pretty much commonplace. So prepare to come out of the shadows. Prog Rock fans unite.

The first song on the CD is also the first song to get stuck in my head titled “Are We To Believe?” Besides Mr. Sherwood, who is always doing something on every song, giving him some help here is Rick Wakeman (Yes), Colin Moulding (XTC), Steve Hillage (Gong), and Mel Collins (King Crimson). When Mel’s part comes in, I was immediately reminded of another Sherwood project called The Fusion Syndicate. Also on Purple Pyramid Records by the way. Came out last year. A solid CD and worth seeking out if you haven’t already. Anyway…so back to Epilogue, the CD starts off sounding like…well…prog rock. From the mainstream to those musicians so involved they sleep with their instruments (U Know Who U R), and simply never losing focus of what real prog rock sounds like.

Let me remind you that each song on Epilogue contains a who’s who of super-star prog rock musicians. John Wetton (UK / Asia), Derek Sherinian (Dream Theater_Billy Idol), and John Westley (Porcupine Tree_Steven Wilson) are on the second track with another example of what a prog rock song should song like. Titled “What Can Be Done?” reminds me of some of the work Mister Wetton did when he was with the group King Crimson.

When I heard the third track for the first time called “Adding Fuel To The Fire”, I knew we had a winner here. It’s the rock in prog I always find most rewarding. The guest stars are Fee Waybill (The Tubes), Steve Morse (Deep Purple), and John Westley (Steven Wilson_Porcupine Tree).

“Tomorrow Never Comes” is yet another superb song found on this album. An old acquaintance, Peter Banks (original Yes guitarist) is on it. One of his last performances sadly, for Banks passed away in the first part of this year. On keyboards, Larry Fast (Nektar_Peter Gabriel) and providing wonderful vocals, Sonja Kristina (Curved Air).

“Shining Diamonds” is a showcase to display a knock-out lineup of Alan Parsons (The Alan Parsons Project), Steve Stevens (Billy Idol), Patrick Moraz (Refugee_The Moody Blues), and Chris Squire (Conspiracy). The latter of the two, their first time on a new recording since the seventies (Yes – Relayer / Chris Squire – Fish Out Of Water). Long overdue with both of their performances as good as any previous collaborations.

The seventh song is “Memory Tracks” with Billy Sherwood playing all instruments and just a tad help in the vocal department from none other than Roye Albrighton from the super prog rock band Nektar. Together their vocals make this one of the best singing performances on the album. Warning…this song also includes crazy cool keyboards. At around the 5:10 mark, just as the harmonies fade, crank up the volume. One of the best songs on the whole CD. A wonderful showcase for displaying Mr. Sherwood’s musical abilities.

“Just Another Day” is Billy Sherwood on lead vocals, with Gary Green (Gentle Giant) and Tony Kaye (ex-original Yes & present day Circa:) on keyboards. Segments into the closing number real well. The title song “Epilogue” contains some serious rock drumming from Jim Cuomo (Fireballet), and get this, spoken word from Hollywood’s William Shatner. For this is one of his BETTER musical moments.

Check it out, prog rock in of itself was made to include such things as Shatner’s spoken word performance. The Moody Blues and Rick Wakeman have included narrative in some of their biggest sellers. Leave it to Billy Sherwood to be able to find just the right vibe so as to present the iconic actor in the right environment. That and the drum work is exceptional.

Using a one to five star rating system, Uncle G gives The Prog Collective – Epilogue…5 solid stars! Having played it enough times so when I hear it now, I know I’m playing a superbly finely crafted prog-rock album. I am looking forward to additional Prog Collective projects coming down the pike. Congrats to, Purple Pyramid. The Prog Collective is a winner, as is their newest CD Epilogue.

Update: Billy Sherwood is now again with the band, Yes, replacing co-founder Chris Squire, who passed away in 2015 (27 June).