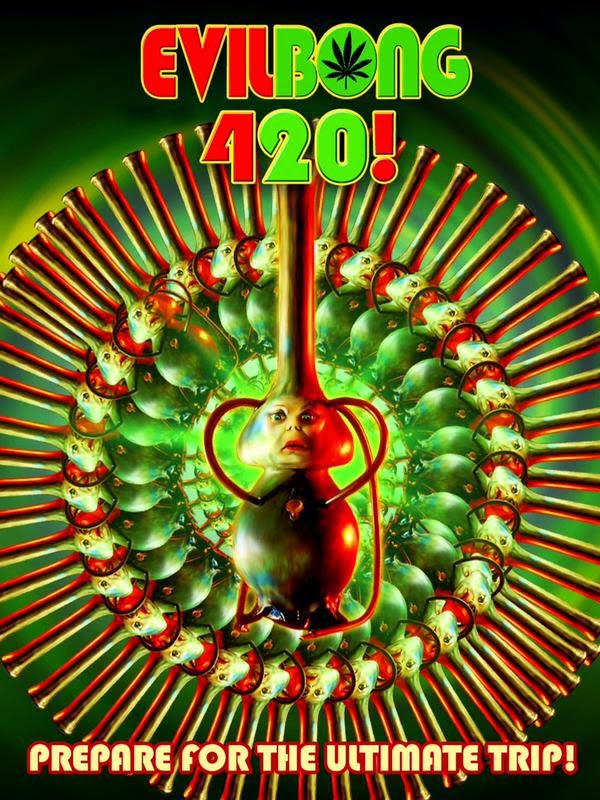 What a better day than to release a pot movie, then on April 20th. A no-brainer right? All day long cannabis festivities. The icing on my cake, was early in the evening of this past April 20th, sitting down in the living room recliner with a nice and hot, fresh out of the oven Paul Newman pizza, a chilled glass of sangria, while under the influence of a popular strain. Turning on Hula Plus. No puffing it up inside the rental. That’s what outside is for. Feeling fine at the moment, and not to be denied any longer, for it’s time to forget damn near all important things, and immerse oneself in what I believe is one of the best, and cleverly written stoner movies I have witnessed in a while. An indie comedy/horror Hollywood B film, tailor-made for the company’s (Full Moon Features) loyal fan base, and what movie history will show, helped expand it even more.

Fair Warning: I predict after digging Evil Bong 420 that you’ll be compelled if you have not already, to check out the previous films associated with this one. And then you’re hooked. That’s all I’m saying.

Did I mention Evil Bong 420 ends with a cliffhanger? Not that I’m giving away anything but it ended like those old serial stories of way back when. The characters you took time bonding with the last hour are all the sudden left in some kind of peril. No advanced warning. Surprised me. Begs to be asked; When will Evil Bong 420 Part Two be coming out? Another question; Will Evil Bong 420 Part Two be the concluding film of this storyline? All good things can come to those who patiently wait. I got my money’s worth, for now. Am anxious for the next segment. 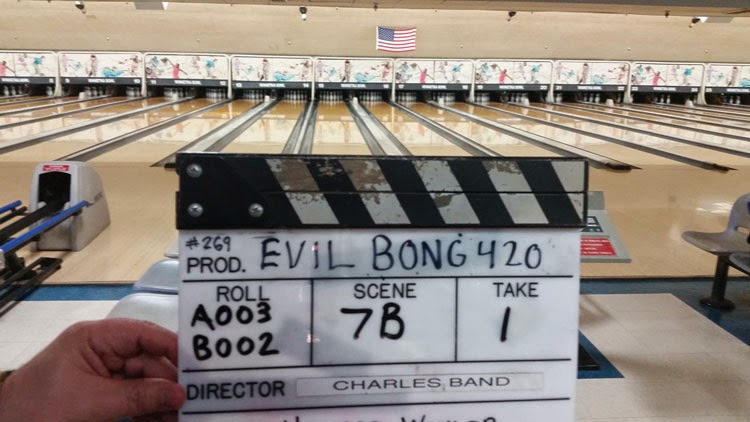 Every line of dialog is worth paying attention to. Excellent word flow that moves the story along very nicely. Expect some funny lines. Remember, this is an adult Rated R comedy/horror movie. The main topic centering around what most States here in America still consider to be an illegal substance; marijuana. The scripts underlying sediment is pro-cannabis. A wise stance to take, especially with the younger generation in American today. The only ones in opposition of legalization and decriminalization of marijuana, and catching news headlines lately, seem to only be out of touch Republicans. Someone would blame the liberal media. Makes me wonder to myself. I said, Self; Why else would otherwise seemingly intelligent people all the sudden go brain dead when it comes to the subject of cannabis. After all, legalizing and decriminalizing is really the only logical thing to do. Why pay for law enforcement busting otherwise good citizens and making them criminals because they prefer toking over boozing or taking pills? It’s apparently safer. Name someone who overdosed on grass only? Politicians believing we’re just stupid, answer our inquiries about legalizing pot, by telling us it’s a gateway drug, and still insisting it’s evil. Is it not obvious people’s interest whatever that might be, are being protected? Think about this. Who loses money if cannabis is legalized? Big Pharmaceutical? Booze companies? What about just hemp? Big Cotton? Big Toilet Paper? Enough of that crap. Back to the talkies.

Add to Evil Bong 420’s entertainment value is bare adult female boobies. LOTS of them. Might even be breaking a record, as far as Full Moon films go. A bare pair here, a bare pair there, sprinkled throughout everywhere. I’ll call it directors Charles Band ode to fun bags. And for those unaware, Mr. Band’s been ahead of the curve and helping free the nipples for some time now. Matter of fact, dudes made it his lifelong pursuit. All done in good fun, of course. This time around, compliments of those all too willing to take one for the team; the Evil Bong 420 ladies.

Have I mentioned the passionate female kissing scene yet? Horniness just being one side effect of being hit by Rabbit’s Weedblower. Soon to be offered in head shops around the Country, or if not on Full Moon’s website in the product section already. Will come with a disclaimer saying it’s just a ‘Hollywood Prop’ (wink wink). Could be for the better. If real, the weed blower looks like it takes at least an ounce of the herb to make the bowl even look like it had something in it. Designed for parties, and works like a charm. For wherever you lit it up at, a party will be soon to follow.

I know Full Moon Features, what was Full Moon Pictures, Charles Band, the Gingerdead Man series of films, and the entire Evil Bong franchise, like I do the back of my hand. Not only that, but I’ll fully disclose that the first ever fan club I joined in my life, was one for Full Moon Pictures back in the 1990’s. I still have the card sent to me. It’s no longer good for discounts or anything. I’ve upgraded. Now Uncle G is a current and in good standing fan club member of Full Moon Features. Like before I was sent a card. Lost it moving last Spring, which bums me out. Am usually not that irresponsible, especially with a collectible. Still hoping to run across it one day.

Straight up, I’m not biased. I could see where those might think I would be. The people who know me, understand it’s the things I like best, that I tend to be critical of the most. Because I come to expect more.

Charles Band is a veteran of Hollywood B movies. Remember 1985’s Ghoulies? Forty years later I come to expect everything with the Charles Band name on it to be above average, and worth what I pay for it in entertainment value. Just about all times, I’m a satisfied customer. Things are never an issue. Makes me think. Why when it comes to film or music, is the emphasis more on a rookies work than a veteran? Isn’t someone experienced, a master at his or her craft? Thus, I have a hard time finding anything wrong with Director/Producer Charles Band forth Evil Bong outing. Something that started back in 2006. The original ‘Evil Bong’ with Tommy Chong. An R Rated, horror/comedy, straight to DVD popcorn flick where the monsters a popular delivery system for marijuana name EeBee, that talks, and had magical powers, thus creating havoc for anyone near it. Also in the Full Moon family, Gingerdead Man. A wisecracking murderous cookie made from scratch with satanic dough. What’s not to love? 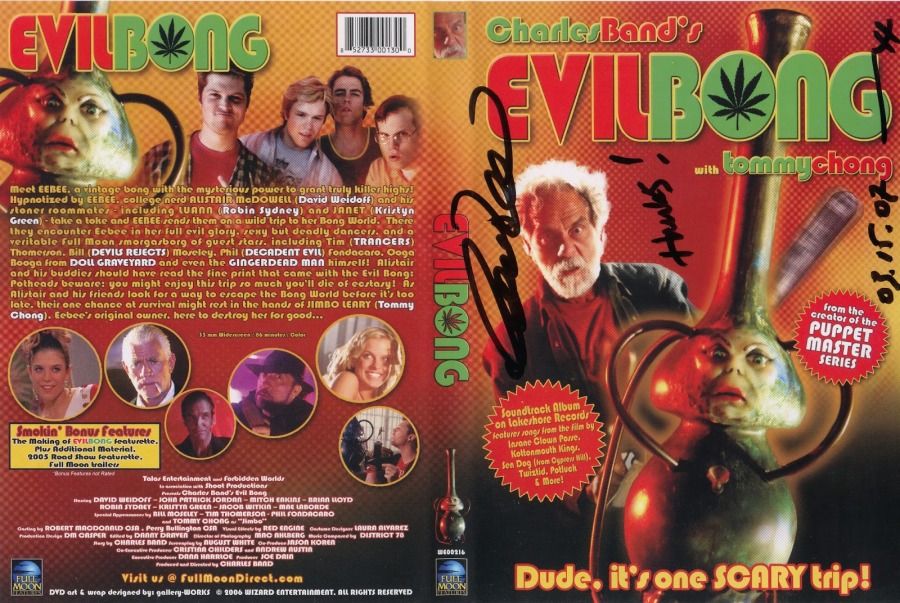 In under an hour’s time, Charles Band gives those viewing Evil Bong 420, the best of the characters between the two franchises (Evil Bong_Gingerdead Man), witty banter, a cool storyline, and adult eye candy galore. Picking up from 2013’s Gingerdead Man Vs. Evil Bong, Rabbit (Sonny Carl Davis) the main character in this chapter of fun, escapes the clutches of EeBee the Evil Bong and her domain, called Bong World, to open a topless bowling alley. Financed by the sale of Ebbie’s weed that Rabbit stole from her while breaking out of Bong World. And along for the ride are Hambone the Clown, and Ooga Booga! Cast information you can find online. I hate to say more and spoil it. Cool first seeing each character emerge, and then intermingle with everyone else.

Using the IMDb website rating system of one to ten stars, whereas one star means it blows chunks, to ten stars which means it’s cool to spend your hard earned cash on, Uncle G gives Evil Bong 420 … all 10 stars! A good old fashion R Rated adult comedy, that reflecting the year it was made (2015), centers around a subject that’s in the news every day; Marijuana. Well done scoring, hardy laughs, cool visuals, and it’s everything a pothead loves, and MORE.

“Uncle G” Shout Out: Sonny Carl Davis should win an Oscar. If only that would happen. The man gives a stand out performance. As does everyone around him. For in Evil Bong 420, there is no character in front of the camera that should not be there. All actors in front of the camera, be it, they have a small or large part, simply shine. Hats off also to those behind the scenes as well. Last but not least, here’s another Charles Band movie I like. As expected. And so it is written, and so it was done. Mister Band … You keep making movies, and I’ll keep watching them.

Back to the Gary “Uncle G” Brown Archives…