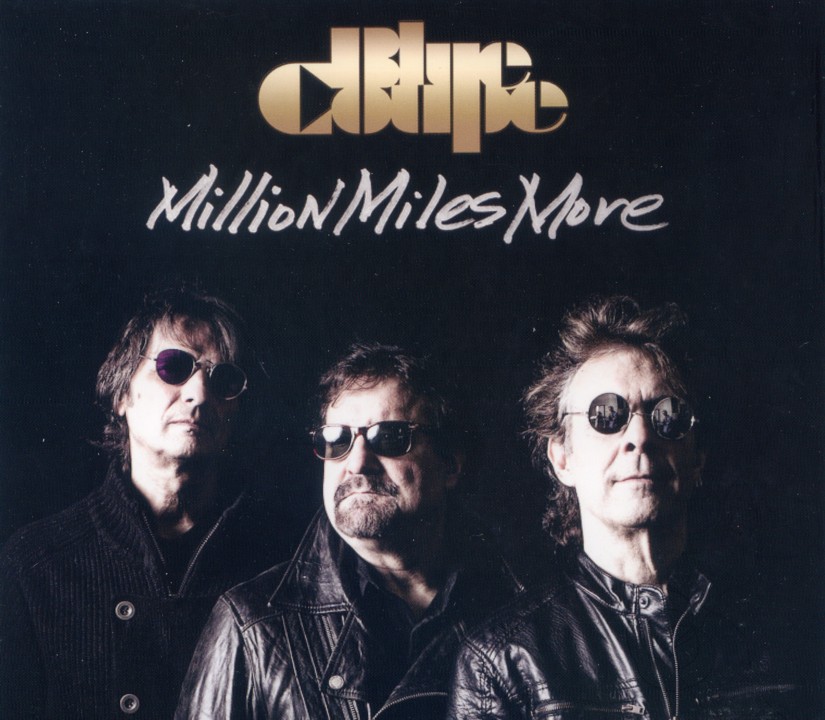 I’m an Alice Cooper fan from way back, so when a member of the original band comes out with something new, I usually jump right on it. Here, one day not that long ago, the opportunity arose. Dennis Dunaway’s band with the Bouchard brothers of Blue Oyster Cult fame, Blue Coupe, had just put out their second studio offering entitled Million Miles More. Good exposure on the Internet, selling their newest through a website that deals with independent musicians. So what the hell, and I ended up lucking out. After listening to it a few times I knew Blue Coupe’s Million Miles More was one of the most solid CDs I heard so far this year.

Arrived in a well-designed paper sleeve, which when opened, lists important information (dedicated to Glen Buxton) and has a photo of a cowbell on it. It’s all wrapped with some other pretty cool photography, and I received it within 72 hours of ordering it via the website Baby Dot Com. I already mentioned that the site sells CD”s from musicians who are independent recording artists, meaning NO major label to back them up.

Million Miles More rocks from the get-go. It’s hard listening to the first two songs and not thinking of the classic rock band Blue Oyster Cult. Helping that along and making an appearance on the CD”s second track, ‘Hellfire Hurry’, is BOC’s Buck Dharma. The CD starts with a cool intro (Prophets, Dukes, and Nomads), and then it’s high-energy rock n’ roll. The second song, ‘Hellfire Hurry’, rocks even more. Seriously rocks!!

The third track, ‘Hallow’s Grave’ features Dennis Dunaway, a one-time band member for Alice Cooper. The vocalist gives a solid vocal performance. The song itself sounds early original Cooper band (Pretties For You/Easy Action) but with a much better sound. No disrespect to Zappa and the gang. On this record, along with Blue Coup and Trish & Snooky doing the producing, add executive producer Jack Douglas. The man’s resume’ is worth Googling. He was behind the controls of one of my favorite original Alice Cooper band albums called Muscle Of Love (1973). And much like that classic original Cooper album, Million Miles More sounds crisp and clear. Nice instrument separation. The main and backing vocals all sound perfect. Sounds great on a real (Sennheiser) pair of stereo headphones.

Such a pleasure hearing some of my favorite classic rockers playing new material and recorded properly. Blue Coupe’s new music coming out of my home stereo speakers (Sony) arouses my senses, which is a one hundred and eighty-degree turn of some other classic rockers’ newer endeavors. I’m hearing material a lot of time from these other older musicians that frankly is putting me to sleep. My guess is they are marketing to nursing home residents. With 50 being today’s 30, I’m not even close to there. Don’t get me wrong, ballads/the ever-famous power ballads are expected on rock albums. Just don’t fill the whole disc with them and then call it a rock and roll album. It should be called a rock n’ snore production instead. The ballads are a wonderful vehicle to show how amazing the musicians are, as well as songwriters. As a consumer, when after-taxes music CD’s are selling at twenty a pop on the average, give me the brand I know and trust. The name Blue Coupe tells me that the group itself should kick-ass playing solid rock n roll songs in the tradition of the group’s for which the musicians originate from. Blue Coupe does this and more.

Speaking of which, along comes a catchy tune called ‘Everybody Goes Insane’. It’s a real, around the campfire sing-along tune. Kidding aside, ‘Everybody Goes Insane’ is a VERY radio-friendly song. One of those songs you hear and then while at work the song pops up in your head. You can whistle it by memory a day after hearing it, which is one way of telling a song is also a solid composition.

The next couple tracks go from a slow tempo, beautifully performed song with an almost Ray Davies vocals delivery and mellow music behind it, to an outstanding getup and wiggle that ass number called ‘Modern Love (Stalking Time)’ featuring Goldy McJohn of Steppenwolf fame (piano and keyboardist). Another radio-friendly song and would be if the guys were still in their mid-twenties. At least here in the States.

Other stand-out numbers include what could be my favorite on Blue Coupe’s Million Miles More, a song called ‘Train Of Thought’. A bluesy number containing cool grooves and fun lyrics to sing along to.

The rest of the CD containing numbers as solid as the one previously heard. The CD includes a bonus track titled ‘More Cowbell (Gotta Fever)’. For those unaware, drummer/vocalist/songwriter Albert Bouchard is the one who played the cowbell on Blue Oyster Cult’s ‘Don’t Fear The Reaper’. One of Uncle’s G’s favorite BOC songs, along with Godzilla. That one kicks ass!! So many more. The same with the original Alice Cooper. Those five guys worked magic together as a group. Listen to any early Cooper album that Bob Ezrin or Jack Douglas produced, and you’ll see what I mean.

Using the five-star rating system, whereas one star means it sucks cat turds and should be avoided at all cost, to 5 stars which means it’s worth your last Mexican Peso, your favorite “Uncle G” gives Blue Coupe – Million Miles More…five stars!! These guys are legends. The talents displayed in each song; High-energy, raw, garage band, good old American rock and roll. No disappointments here. I look forward to seeing it on all the Top 10 lists at the end of the year.