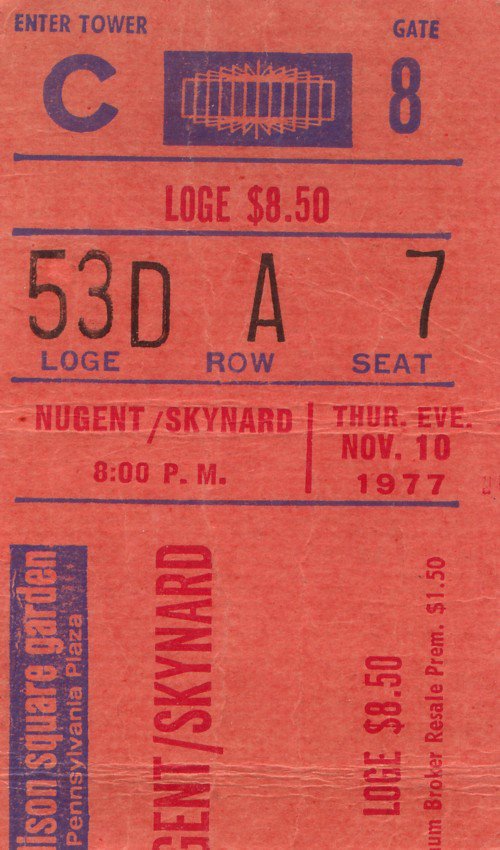 I purchased a ticket immediately after they went on sale. This was back in the year 1977. I was spinning Ted’s ‘Cat Scratch Fever’ album along with the one before that, ‘Free For All’, just about all the time. Add to that, and this was somewhat connected; Meat Loaf – Bat Out Of Hell (1977). That lasted for a while. In between playing those three almost non-stop, I would play Lynyrd Skynyrd’s live, ‘One From The Road’ album (1976).

By the way, just about everything for me back then was on vinyl. Towards the end of the two album set, on Side B, Van Zant asks the crowd: “What song is it you wanna hear?” The group was warming up for, The Who. Anyway, Freebird it was. That, and of course ‘Sweet Home Alabama‘ got played repeatedly.

Autumn of ’77 brought along Lynyrd Skynyrd’s newest album; Street Survivors. I had the original album sleeve. The Stone’s Some Girls also. There are benefits to grabbing releases on its first day. Both of these, by the way, having troubles over their original cover art.

How tragic! Unbelieveable! even more so there were survivors. Stunned everyone! Those that died, it broke our hearts. The concert went on, but not with Lynyrd Skynyrd. There was a replacement. Our train was late. I missed the opening act. But we did catch Ted’s entire performance. All I remember is taking our seats, and this very good looking female to my left saying hello while offering to pass me her pipe. The next moment, there was Ted and his band on stage.

I wasn’t aware of Nugent’s whole catalog. Came on board with, Cat Scratch Fever. I did purchase his previous album ‘Free For All’ after that. That album had the bonus of having a then-unknown Meat Loaf doing vocals on several of the selections. All artists mentioned in this post gained huge strides in their popularity, pretty much all around the same time frame here.

Before I knew it, Ted and his band flew through the set, and before leaving the stage, Nugent leaned his guitar on one of the speakers. On purpose, because the results was blasting the Garden with very loud feedback. The encore was incredible and also over before I realized it. It was an all-day event just getting to New York City. Not the easiest. The event itself just flashed by. Happens all the time, right? Same when I saw, Led Zeppelin, The Who, Alice Cooper, Yes, etc…

A very high energy performance by Mr. Nugent and the whole band. The rockers were definitely very much on top of their game here. Ended up I knew about half the songs played. Of course, I dug the whole concert.

A return trip via the late-night train. A long stopover in South Amboy if I remember correctly. Happened often, if you traveled the rails on a regular basic. For sure I slept well that night.