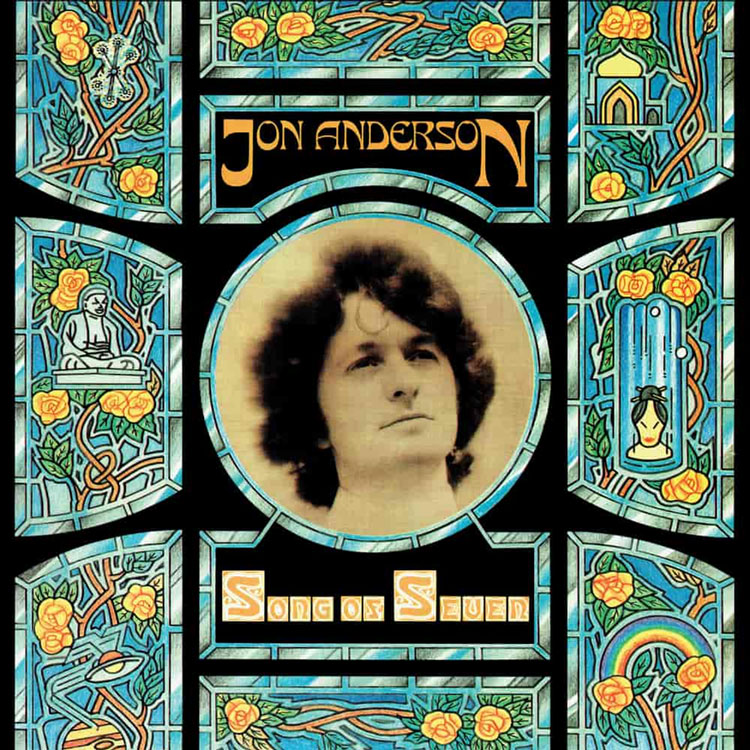 It’s hard to believe that Jon’s second solo record, Song of Seven, was released four decades ago. His second solo effort and the first time in his solo career that he recorded music since leaving Yes in a group-like setting; The New Life Band. Add some talented guest appearances like Jack Bruce on the uplifting tune, Heart Of The Matter, and you get a ‘Top 40’ album in the U.K…All songs were written by Mr. Anderson, except one that had a co-writer. He’s also the keyboardist on the whole album; Ronnie Leahy (the song; Heart Of The Matter).

Here in the United States, Song of Seven didn’t fare as well. It did chart, just not nearly as good. I admit to being too caught up in my own personal life back then, to even realize its release.

I believe I discovered Jon’s Song Of Seven after his studio follow-up, Animation, which was two years later. I remember purchasing Song Of Seven on cassette, which was all the rage back then. A couple of decades later, I paid a lot of money for a CD import (Japan), which I still have in my YesRelated collection. Anything a member of Yes does on his own goes there. I have a rather large collection. Decades in the making. I of course collect Yes stuff as well; studio, live, greatest hits, box sets, DVDs/Blu-rays, etc…It’s been a FUN hobby. Regarding original Yes vocalist/member, Jon Anderson, I should have just about every commercial studio album and then whatever else he participated on, including soundtracks, Jon & Vangelis, and making guest appearances on other musicians’ albums.

The Rock n’ Roll Hall of Fame inducted group, Yes, has been a favorite rock band of mine since…OMG…1973. Thanks to a cool childhood friend that I still have today. Only fair, for it was me who in that same year, who turned him onto, Alice Cooper. The album they were touring at the time; Billion dollar Babies. Both acts under the ‘art-rock’ umbrella, back in the first half of the 1970s. Others our age were listening to AM radio bubble gum tunes. Much of what they played, being the most nauseating music on the planet. In our early teens, Greg Zyskowski (brother from another mother) and I certainly knew how to pick ‘em. Nowadays, Greg’s a professional musician (pianist-keyboardist), married to a wonderful lady, and is a private business owner on the Jersey Shore, where I grew up at.

I had the opportunity when i was writing for Classic Rock Radio (UK) to jump on a press junket while Jon was doing promo for an album he did with progressive rocker Roine Stolt of The Flower Kings called; Anderson/Stolt – The Invention Of Knowledge (2016). I was able to interview him, and in doing so, asked the following question in which I will re-print here, along with Jon’s response:

Classic Rock Radio: How do you know when doing lyrics for a song, that it’s complete? When finished, do you ever go back to it for a re-write, or do you just move on to something new?

Jon Anderson: Interesting question, I seem to write lyrics as I sing that first idea, in my mind’s eye, I get a feeling of what I want to say, and the words flow out like a fountain of expression, later on as everything starts to click, I change a word or phrase, sometimes it’s a last-minute idea that needs a word changed…but it’s always fun, and at times, I will listen to what I wrote 30 years ago like ‘Song of Seven’, and think ‘wow, I was really dancing an interesting word dance, lyrically’

Note: The whole interview can be found here: https://garyunclegbrownarchives.com/2016/06/26/interview-jon-anderson/

After listening to Esoteric Recordings archival release several times, and following along with the words, as I did decades ago, I fully agree with Jon, that he was. I can’t come straight out and say I understand everything Jon is saying, lyrically. Personally, I believe Jon leaves room in his lyrics (sometimes) for different interpretations. There are compositions where that is not the case and the topic(s) are obvious; examples being – love song or awareness. Lots of poems and stories.

I come to understand that Jon Anderson’s song lyrics are poetry/scattered or well-organized thoughts that maybe is something only Jon can fully understand. For, after all, he is the creator. The magic is when everything fits just right, including the actual music, in a finished composition. Can’t happen all the time, but singers like Jon Anderson have a long-standing reputation for having more successes than failures.

Jon Anderson is a word craftsman with a seemingly acute understanding of the world around him; Mother Earth.

Jon has a very unique singing voice. A musical instrument in its own right.

Jon’s a composer of songs that sold in the millions.

Jon’s a multi-instrumentalist. I watched Mr. Anderson do a one-man sold-out show in Dallas Texas (USA), back in 2012. He’s singing, telling stories, playing different instruments. I closed my eyes at times when Jon was singing, and it was like hearing the record. Incredible! Was four years before that when Mr. Anderson had a terrible health scare in which the rock n’ roll vocalist almost didn’t survive. Luckily for his family and all of us, he did.

The most important thing is the sound is crisp. Instruments like the bass guitar can be heard clearly. The silent parts are quiet, and the more upbeat music promotes alot of smiles. Production values shined on the original. Esoteric Recordings disclosed that this was remastered from the original Atlantic Records tapes.

Note: Original album artwork in a digipak + the booklet also features a new essay with an exclusive interview with Jon Anderson.

Even if like me, and you already purchased JA – SOS several times. With the whole package done this well, you really don’t want to miss out on this. I’m just saying. Sounds like a sweet deal to me.

This re-mastered and expanded version has Jon’s stamp of approval. And along with that, comes two bonus tracks. Radio edits (U.S. Promotional) of two songs that would be on a list, if compiling names of songs for a Jon Anderson greatest hits album; Some Are Born, and Heart Of The Matter.

An interesting tale. The song, Some are Born, started off as a Yes composition in which demos were recorded after the Tormato tour. In my opinion, this version found on Jon’s Songs Of Seven kept the good, and so rightly so, dropped the rest. Found as a bonus track on either a remastered Yes – Tormato CD, or on one of the thousand of YesBootlegs there is. I’m glad Jon stuck with it. I like the finished version.

My favorite track and another tune that should be included in a Jon Anderson greatest hits collection would be the title track; Song Of Seven. Akin to one of Yes’s longer compositions, it clocks in at a little over eleven minutes. Needs to be listened to in a suitable, quiet environment. The intro has an almost classical music feel. Then, the showpiece of the album builds steam with Jon’s vocals leading the way. Three minutes into it and a serious change of pace, yet again as with the intro, the song becomes stronger, with it now resembling and turning into a more traditional prog-rock number, which Jon is really known for. In other words, just add a little electric guitar. OH, and turn up the volume towards the end; beautiful lowered finish.

Using a one to five-star rating system whereas one star means you can pass it up to five stars which means you CAN’T pass it up…I strongly recommend this new version; a 5-star archival release. The only way this could get better would be if Jon Anderson personally delivered it himself, after ordering the CD online. So, it can’t get any better. Really…we don’t want Jon out doing shit like that during COVID-19. Back to this remastered and expanded edition of Song of Seven, I’d recommend buying either the new 2020 digital or physical CD. It’s Jon on his own, right before the fame of his next solo, Animation (1982), and before re-joining Yes for their mega-hit studio album; 90125 (1983). This time-frame also includes Jon recording with the legendary Vangelis, and whatever other projects. The late 1970s – early 1980s. A busy time for one of music’s most distinctive sounding singers.