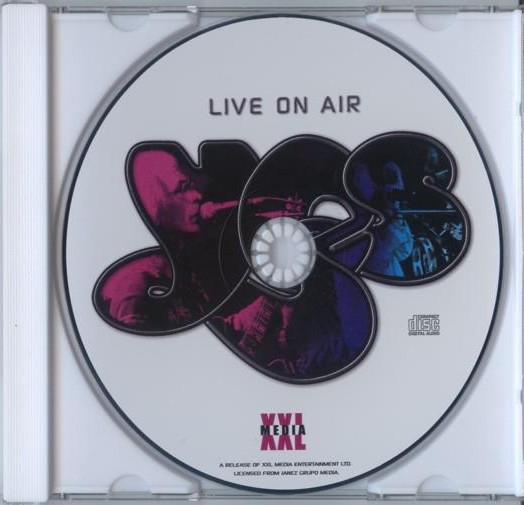 About once a week I get myself a Vanilla Latte’ at Fry’s (retail store), here in Houston. Besides the 5 dollar coffee, they also have a well-stocked DVD department there. My thing’s horror and sci-fi B movies mostly. I walk the different aisles looking up and down at titles. Something like Gingerdead Man 2: Passion Of The Crust (2008) would certainly catch my eye on days like these. Besides the last row of DVDs is music CDs. The selection was better a year ago than it is today. As I said, I’m there for the fancy caffeine beverage and to find a so bad it’s a good movie, that I could entertain myself watching later on. Finding anything music-wise is a bonus.

Near the end of the rock n’ roll CD selection, and right next to the music CDs they are blowing out for five bucks (which includes lots of really good classic rock stuff), I find the following; Yes – Live On Air. Looks like a newly released CD. No copyright is offered/included anywhere on what little printed words there are to this product. Internet research suggests that it might have come out late in the year 2011, or at least was first mentioned around then. The CD is news to me. I keep updated with Yes. Nothing out of their camp that I’m aware of that reflects this as an officially endorsed product.

The title, Live On Air, tells us, consumers, that this is a ‘live’ offering. Tiny, hard-to-read print on the back of the CD tells us it originates from a 1985 concert. For YesWest fans (nicknamed for the specific Yes line-up that consisted of; Anderson, Kaye, Rabin, Squire, and White) this is especially, exciting news. The date informs us that the show is from their 90125 tour. Largest seller they ever had in their over 40-year existence now. There are official live offerings from this tour including a brilliant film from that period; Yes – 9012 Live. Regarding audio CDs, not the traditional live album per-say. Enough out there to at least provide a good taste until a proper live audio recording (in concert_whole show) comes out of YesCamp. I’d like one from the Big Generator and Talk tour as well since I’m mentioning it. Was not an immediate reaction, but I seriously come to like the Rabin era of Yes. Anything YesOfficial that’s pulled out of their archives and released with Rabin, and let us not forget Tony Kaye, is cool with me.

The photo that accompanies the information found on the back of the Yes – Live On Air CD is NOT the Yes line-up that would have been the group who performed what one was to hear on this “rare live document”. Not the only boner they pulled. I’m still laughing…it really says; “rare live document.” How rare is a concert performed and broadcast live over the radio for free? You don’t see that wording on many live music CDs here in the States. This shows the command of the English language was lacking. They are marketing so an American fan like myself here in Houston Texas would be interested and make the purchase. Why not hire someone who understands what the words mean, or does it even matter? This is the impression I’m getting. Add to that a tracklisting that I know is bullshit. For example, this line-up never performed the almost twenty-two-minute song; The Gates Of Delirium. What they did play live was the ending part referred to as; Soon. Jon Anderson’s solo moment. Also according to the tracklisting erroneously provided was track eight, Astral Traveller. A wonderful song I would have wished to see this line-up tackle. It never happened. Yet another fuck up is track three which includes a bonus hidden song as well; And You And I. Lacks the whole last part of the timeless classic. How horrible is that?

Another screw-up. The CD cover sleeve opens up to a nice photo collage of the Fly From Here Yes line-up. Geoff Downes and Benoit David were nowhere found on this eighties live in Argentina recording.

Playing the Live On Air disc sound-wise reminded me of cassette boom box recordings I made in the 1980s. Actually, I made better ones. My edits were smooth. Not on this “rare live document”. The song, And You And I, is missing the ending part of the song. Owner Of A Lonely Heart is incomplete as well. The Yes hard-rocker, City Of Love, goes blank for a moment or two during a very cool Trevor Rabin part. Where they list Astral Traveller, a song penned by ex-member Jon Anderson as being found on track eight, it’s really ‘Starship Trooper’ that you hear. There’s a pattern here; bad editing and incompleteness (due to bad editing). Also if me, I would have at least tried to cut out the radio DJ chatter. It’s distracting. My conclusion is that the source was a homemade recording, taped right off the air. Not with the best recording equipment neither. The radio stations’ archived recording would contain far superior quality unless they were having technical difficulties.

Believe It Or Not

Two good things. I just got done shitting all over the thing. And please…Yes’ performance was excellent as one would expect. That is NOT the problem with the CD. Everything else about the physical music disc itself is the problem. Yet it is factory pressed like a real store-purchased is. That’s a plus. The last track on the CD could be considered a collector’s piece. Yes covers The Spencer Davis Group hit; Gimme Some Lovin’. For a bootleg-like quality disc that has its share of troubles, the sound quality here on this track could be turned up some. As a dedicated fan since before Relayer came out, let’s just say it beats NOT having a recording of it. For this reviewer, the whopping $3.99 spent, was for this song and nothing more.

Uncle G’s Rating. Using the one to a five-star rating system, I rate this CD, and again not because of the performance; ONE star. In all sincerity, pass this one up.