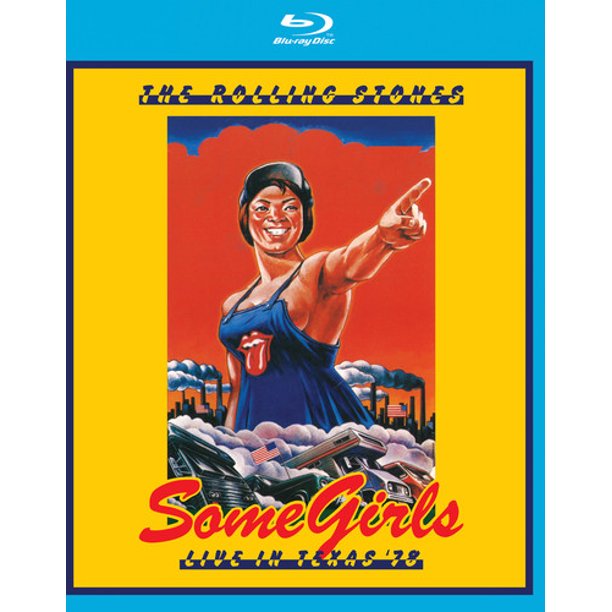 So about a week ago I’m in the music DVD aisle in Fry’s, and I run across this new Rolling Stones item. A DVD from back when they were touring Some Girls. Sprang from their giant archives I imagine. Most excellent !!! Different packages, going for different prices. You can get a regular DVD for about 12 bucks. The Blu-ray was 3 dollars more. The deluxe was a DVD (maybe Blu-ray) and an audio CD. I picked the Blu-ray. With tax, it was under seventeen bucks.

In the year 1978, a concert ticket to see the Stones play at JFK Stadium in Philadelphia cost me around 15 bucks. Less than the Blu-ray DVD I just purchased. Back then I was sixteen years old. In high school back then a popular question was if one was a Rolling Stones or a Beatles fan? For some weird reason, most were fans of either one or the other. Like it was impossible to be fans of both. I really did dig The Beatles. Still do, but I also liked the Stones. I must admit not as much. Out of all the musicians in those bands, I liked Paul McCartney the best. That was back when I was a teenager. Over the years as I matured, it’s changed somewhat. And leaning more towards the Rolling Stones favor.

Maybe a half year before the studio album Some Girls was released, the Stones came out with a live gem called; Love You Live. A double album. I fell right into it, playing nothing else for the longest time. So when I got my concert ticket, I was just really hoping that I’d get to see them play like they came across on wax. I probably thought of The Rolling Stones as more of a party band. I saw their film Gimme Shelter several times at a midnight theater showing. I would go with different young ladies and we make out the entire picture. I never saw much of the film, but I heard everything. Regarding the songs, I knew the older hits. Already seeing Led Zeppelin, now it was time for me to be in the presence of this supergroup.

The concert date was June 17th. It was a Saturday. I was going to Philadelphia with a group of friends. All of us were excited about going. The band Foreigner was warming up. Was excited about seeing them also.

We partied our collective asses off several nights leading up to the date of the show. Two nights before the concert, the unspeakable happened. We were involved in a car accident. The auto we were in lost brakes, and we drove into a higher than usual sidewalk/curb. The car stopped like it hit a brick wall. The driver thought at first he killed everyone. I was in the backseat with two young ladies. The front seat on impact moved back and my foot being underneath it, was injured as a result. The ankle was sprained. My foot swelled to the size of a football. The doctor said I would have been better off breaking it. I was given crutches.

Friends all the next day came and visited. I was sharing a place to live. Most visitors brought booze. One older friend reached out his hand to give me what he said; “would make you feel all better”. This miracle pill was known as a; Quaalude. Later that night, just a stone’s throw from Madam Marie’s psychic reader/fortune-telling building on the Asbury Park boardwalk, I proclaimed myself healed and threw my crutches over the rail into the Atlantic Ocean. The next day after the Quaalude’s wore off, I had to get another pair of crutches. We missed the concert. I never did see the Rolling Stones or Foreigner for that fact.

This Blu-ray disc makes up for it. Damn sure does. This is sweet !!! From the get-go, picture and sound quality are off the chart. I’m so glad I spent the extra three bucks for the Blu-ray. You can see the sweat drops fall off Jagger. Not that I find that appealing. It’s the details you see. While doing so, you’re hearing the show like you’re there. Close your eyes and your imagination will plant your feet front and center, right by Mick. Imagine hard enough, and you can smell the weed coming from the crowd. This is Dallas, Texas in the late seventies. Everyone’s smokin’ something. Our guitar players here do just that. Regular cigarettes. Between Woods and Richards, they smoked so damn many cigarettes that I started feeling like I would like one myself. How weird is that? It’s been since November of 2007 since I had a drag. I did get a kick from watching that. Mick was such a help. He put their smokes out for them. Again…the overall picture…details are incredible. Got some pretty Texas women in the audience. Something to see for everyone.

The disc starts with a glance of the crowd before showtime. Like a page out of a late seventies high school yearbook. It’s an indoor concert. Seventeen songs were performed in all. They hit stride by the third song; Honky Tonk Women. It is a tour of their album ‘Some Girls’ and they do just that by performing seven out of the ten songs that make up one of the group’s biggest selling albums. Nothing half-ass about this. It’s not a so-called off night for the band. They are rehearsed and well-tuned. The audience eats out of their hands from the first moment they take the stage. At a frenzy whenever Jagger and company called for it. A perfect night for the audience and the main attractions.

That’s not all. Bonus footage! A new interview with Mick. A poster of the DVD cover behind him in which he comments. It’s funny seeing the interviewer try to get at questions that Mr. Jagger can remember. For one thing, and not good for one’s memory, the band revolved around booze and drugs more than once in their now fifty-year career. Especially in the time span, that Some Girls covers. It was before and after the album that Richards was dealing with being busted for heroin. In Canada, back in 1977. He ended up being a very lucky man. Probation and community service (benefit concerts). That’s of course touched on, as well as other prevalent subjects. Mick is cool with answering questions and tries to provide whatever information he can. Seemed that way to me.

Back in ’78, I watched the super popular television show, Saturday Night Live. That’s when I wasn’t already passed out from drinking too much. I remember coming home early so I could catch the Rolling Stones as musical guests. That was a BIG thing. I had this tiny black and white TV set. I was poor. It’s all I had back then. I was cool with it. To my delight, the SNL footage is included as a bonus feature. To see it now…on a big screen…in color…wonderful picture clarity…blows me away.

Rating this one out of ten stars, Uncle G gives it a perfect score; 10 Stars! I watched this twice in a 24 hour period. It makes me feel at peace with missing the band all those years ago. I recommend this for every fan of classic rock out there. It’s that good!!