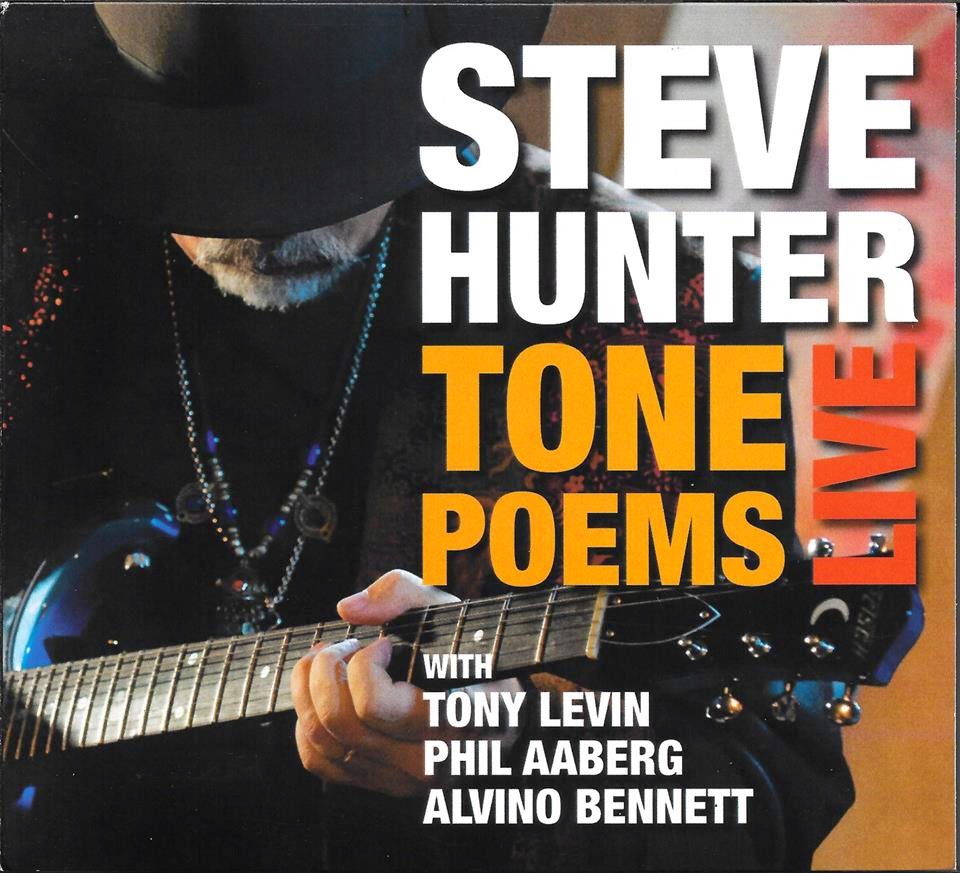 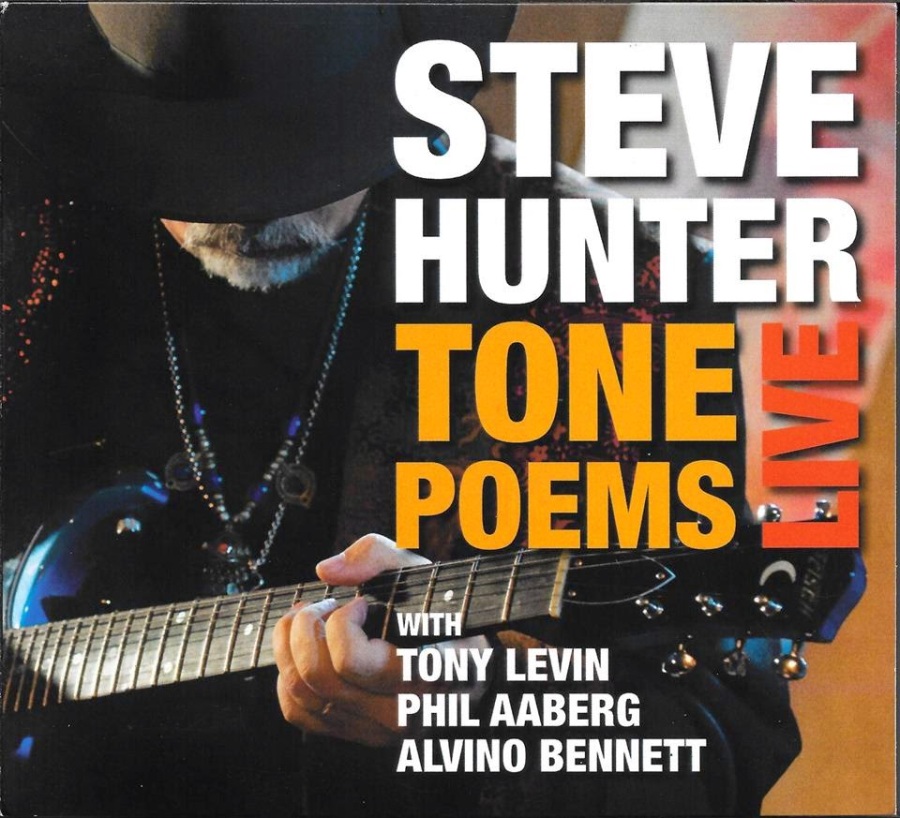 If I had to describe Steve Hunter’s newest release, Tone Poems Live, then I’d say it’s an instrumental album with feeling. “Retro sounding”, a local professional Houston bass player told me. In a warehouse environment, I played it aloud for that little piece of the world to hear. Questions directed at me on what happened to be a beautiful Sunday afternoon ranged from who was the artist we were hearing, to what’s the name of the CD, and one of my personal favorites…are you going to Pink’s Pizza later on? A slice of good old fashion cheese pizza, and memories of my youth flash before me. Included in that is the guitar stylings of Steve Hunter. For back in the day and more recently, Steve played with Alice Cooper. Both the band and solo artist. Really not a bad lick anywhere, which is why I imagine they keep asking him to come back. Alice rocks!! And in part due to Steve’s musicianship over the years, Vince/Alice has received the recognition that equals that of his work with the original Alice Cooper band. Example, on Welcome 2 My Nightmare (2011) Alice’s follow-up to his mega debut solo smash hit album Welcome To My Nightmare (1975), Steve’s playing steals the show on the opening song, ‘I Am Made of You’. Since doing this professionally, Mr. Hunter has performed with the legendary Lou Reed (RIP), David Lee Roth, Meat Loaf (toured), and Peter Gabriel; then add his own catalog of solo material. An outstanding career, and one that gets spotlighted in this newest live release.

For the record, this review is all about the audio CD. I have yet to view the DVD. In soon enough time, believe me, I will. In the meantime, the audio disc is holding me over nicely.

The word “live” does not, in this case, mean Steve and his band are playing in front of thousands of people doing a concert somewhere, but instead performing altogether at the same time in a recording studio. Considered old school nowadays, and the way Steve is comfortable getting the task done. The results pay off.

Joining Mr. Hunter on this project is Mr. Tony Levin on bass. I would have purchased the new CD with it being a new Steve Hunter release, even if Tony wasn’t in the band. Now, I have two reasons why to purchase it. I have been a Tony Levin fan for some time now. As a new aspiring bass player with two lessons under my belt, I can safely say the man will inspire me to play the bass to the best of my abilities, till my last dying day. And by the way, Tony is having a GREAT year also. Besides working with Steve, Mr. Levin just put out the coolest traditional jazz album with his brother Pete entitled Levin Brothers (Lazy Bone Recordings). As they say, variety being the spice of life, I do branch out from classic rock from time to time. Doing just that, I came across The Levin Brothers – the CD, a newly released gem. Back to Steve, his playing is a bit of everything; bluesy, jazzy, funky, and the dude rocks! Steve Hunter – Tone Poems Live proves that with every repeated spin. Assisted by Dave Mason’s drummer, Mr. Alvino Bennett, and a very cool keyboardist with yet another impressive past, Mr. Philip Aaberg.

Each track is a part of Steve, even if not the composer. All my years of hearing Steve on record, or on live recordings, I can only assume after all this time, that the guitar and Steve are one. That the instrument is akin to a soul mate. Something special/dear to him. I’d like to strive for the same regarding my own bass playing. With some musicians, entertaining is nothing more than a job. Pays the bills. I never get that feeling with Steve Hunter. That guitar playing isn’t just a learned skill, but when done right, the sounds emitted, a universal language enjoyed by damn near all who reside on this planet. I have met a few people over the course of my life, who say they don’t like/get music. Puzzles my mind.

The first two songs on Steve Hunter’s Tone Poem Live, ‘The Idler’ and ‘222 W. 23rd’ absolutely blow me away! From precise to funky, to even sexy. The volume is now set to LOUD. It’s not that it gets better but instead stays consistent. That’s the magic. No vocalist here and the center of attention just happens to be one of the best guitarists in music today and his friends. Accompanied by those behind the scenes that make this all a solid CD from beginning to end. Nice!!

I could go on and on about each track and how wonderful I find sitting back and enjoying each and every song. Instead, I’ll speed up the process and just say flat out that if anything I said up to this points interest you, then go check this out. Just stick Steve’s Tone Poem Live CD in your home stereo, press play, and let its marvelous sounds fill the space you feel secure enough to walk around naked in from time to time. Not too loud that the cops come banging on the door. Kills the mood.

Uncle G’s rating of Steve Hunter – Tone Poems Live, using the one to five star rating system commonly found on the Internet, I give 5 Stars (and five exclamation points). This CD is worthy of major awards and at least one follow up project with the same musicians.