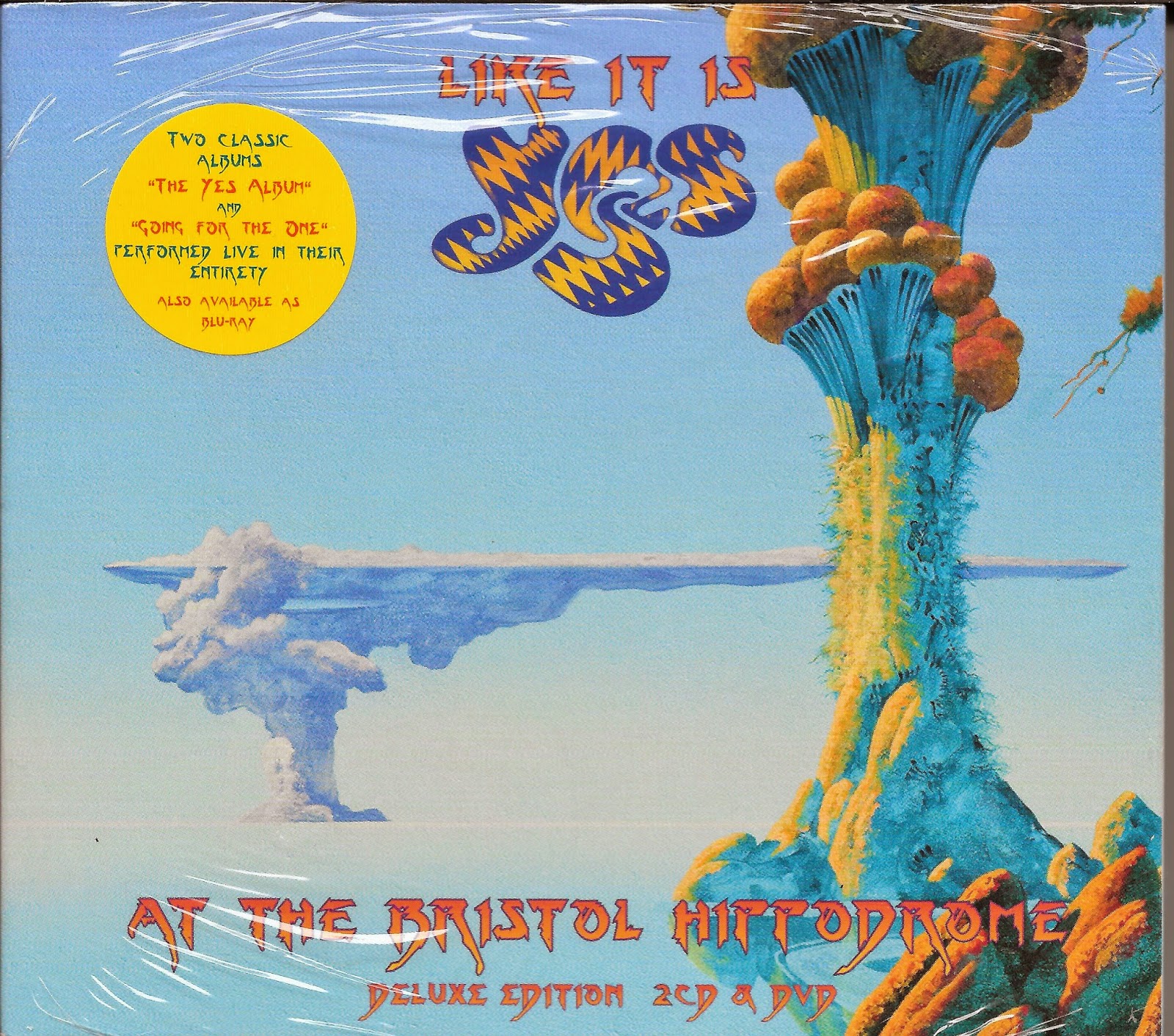 So I decided on a whim to go into my local Best Buy, which is nowadays more an electronic/appliance store, than the SUPER CD/DVD store it was in what I’ll refer to as, its former glory days. Rows and rows of music CDs and movies. Not anymore. Very limited selection. So imagine my surprise when I glance down while checking out what CDs they did have, and found the new Yes live album, released just this past December called; Yes – Like It Is_At The Bristol Hippodrome (2014). The deluxe 2 CD & DVD edition. With new Roger Dean artwork. Been a fan of his, and the band Yes, since the nineteen seventies. So I asked myself. I said;

“Self, how can I walk out without purchasing this fine item?”

With change back from my twenty dollar bill, I traveled home with a new addition to my ever-expanding Yes CD collection. Been a collector of Yes and what I call Yes Related CDs since 1992. My first Yes on compact disc was The Yes Album (1971). Gave the CD away some years later to one of my teenage nephews, when I got the remastered version. A move with someone of the younger generation, so to help keep the Yes flame going. Their newest retail product, Yes – Like It Is, is also available on Blu-ray in which I might have gotten instead if stocked. That’s OK. For me, this deluxe package works!

Before munching on a yummy dinner of baked chicken and rice, I inserted the DVD into my player. Let the show begin, I told myself. Was seriously looking forward having seen this line-up last year perform in their entirety two albums from Yes’ glorious past; Fragile (1972) and its follow-up, Close To The Edge (1973). Plus new material from their latest studio, Heaven And Earth (2014), and a few GREATEST hits. The review I did on this show for Classic Rock Radio is online. Was my first time witnessing Jon Davison on vocals, and Geoff Downes play as a member of Yes. Wasn’t disappointed in ethers performance. Both helped make the core members of the band, shine and be themselves.

Yes – Like It Is was recorded May 11th of last year, at the beautiful Bristol Hippodrome (U.K.), before what appeared to be a sold-out crowd. Released from that concert, about three-quarters of the entire performance. The setlist included playing three entire albums, starting off with Close To The Edge (1973), and then cap it off with one of the band’s earliest hits, Roundabout. Believe me, the audience got their money’s worth…PLUS! Preserved for the archives, and presented here, is the band’s live performance of two classic albums from Yes’ glorious past; Going For The One (1976), and guitarist Steve Howe’s first studio with the group, 1971’s The Yes Album.

After hearing a snippet of Igor Stravinsky’s Firebird Suite, the DVD starts with the band launching into the album, Going For The One, with an outstanding performance of the title track. When released back in the day, FM radio played this, and a song they will perform later on called; Wonderous Stories. Both crowd favorites. If into gifted guitarist, watching Steve Howe will blow you away. And if not on this song, surely the next; Turn Of The Century.

My favorite song out of the five offered on ‘Going For The One’, comes next. A Chris Squire penned number called; Parallels. This, and ‘Going For The One’, is the more upbeat rock songs on the album. The last two songs on ‘Going For The One’, being more on the mellow side. When I had a turntable decades ago, I played ‘Side A’ of this album, way more than ‘Side B’ which had contained two songs; Wonderour Stories, and many a Yes fans favorite; Awaken. I liked Yes best when they were the traditional five-piece rock band. An electric guitar, instead of acoustic. A pounding beat, and a bass line you can feel. With standout keyboard playing. That to me was Yes. There is a part of ‘Awaken’ that rocks, but for me, it doesn’t last long enough. Regarded a masterpiece by critics worldwide. The three-minute forty-five-second long, Wonderous Stories, was popular and is nowadays on the official list as one of Yes’ greatest hits.

The ‘Yes Album’ is a top-five Yes album for me. Popular with a lot of other people as well. Traditional FM radio classic rock stations have half the album in their daily playlist. My favorite previously released live versions, being off Yessongs (1973). On wax, a PERFECT album side. Just two songs; Yours Is Not Disgrace, and Starship Trooper. One of Yes’ finest recorded moments. Were certainly on fire that night. This version done 31 years later will not disappoint. Same with the Yes classic, I Seen All Good People.

A smile comes when vocalist Jon Davison introduces what ended up as one of Steve Howe’s greatest hits; Clap.

The last two songs performed for the camera are two of Yes’ deeper cuts; A Venture, and Perpetual Change. Most music performed up to now has been pretty much on the mark, meaning it resembled what one heard when playing the records. Even the silent part in between songs. Not much distraction with tuning, or stage banter. A little different is Geoff Downes stand out performance on the rarely ever performed song entitled; A Venture. Nice added keyboard work by Geoff, with the finished song sounding more like a group composition. Next, original Yes member, bass player Chris Squire gets to boogie some during a rousing version of Perpetual Change. Also not to be unnoticed…Chris Squire’s nicely done backup vocals throughout the evening as well. Been that way since day one with the band. Some Yes fans have wondered to me why Yes didn’t just become a four-piece after Jon Anderson’s departure, and have Chris do all the singing. Because he sounds so capable of doing so, the decision to do this sounds most logical. What a lot of hard work this would be. Chris, I’m sure knows his bass parts very well. Easier to just hire another singer. Besides, Jon Davison sounds akin to Jon Anderson when he was in his thirties. A few Yes fans have told me this as well.

Using the one to a five-star rating system, whereas one star means it sucks every way imaginable, to five stars which means it’s cool spending hard-earned cash on it, Uncle G gives Yes – Like It Is_At The Bristol Hippodrome …the CD / DVD Deluxe Edition; 5 stars! Worth the price of admission is the last two songs mentioned. The rest is fine as well. I did play the CDs the day after viewing the DVD. Produced by Yes, with audio mixed by ex-Yes member, Billy Sherwood (World Trade / Circa:). Good job on that btw! When it comes to music, I prefer hearing it out of my home stereo unit. I have a BIG pair of Sony speakers, that I love blasting music out of. Am not into it being so loud, that it distorts. Not the case here. This has a real crisp, live sound to it. When played I can almost feel like I’m right there in the auditorium’s sweet spot. Here in Texas, am sure my neighbors loved hearing this latest live official release by Yes, as much as I did.

Oh yeah…forgot one thing. Didn’t get an opportunity to mention him anywhere; Mr. Alan White. One of the BEST drummers on the planet. His performance on Yes – Like It Is … solid as usual. Never to be taken for granted. A pillar of strength in the Yes establishment.

And while at it, a sincere thanks to those formerly associated with the group, especially those who helped create the music heard on this new live release, and were not a part of this official Yes presentation.