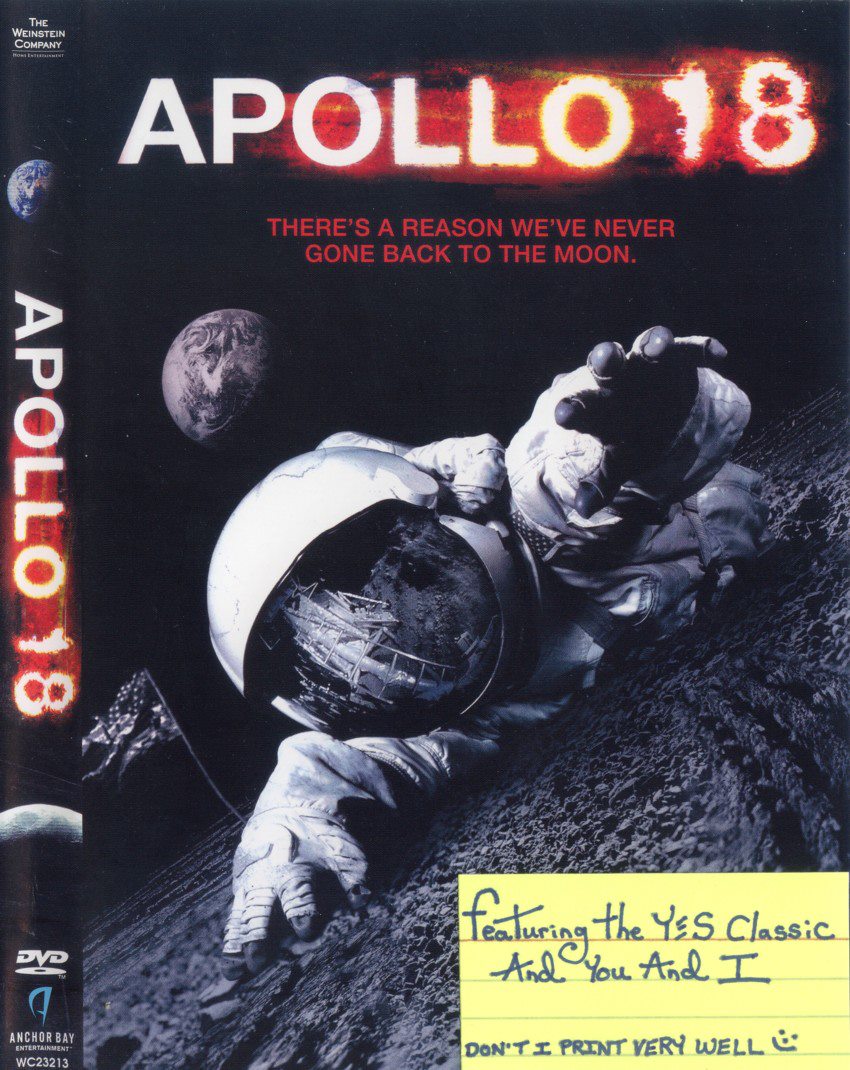 As previously stated, I’m NOT a fan of the lost footage films. I saw the indie film Blair Witch Project when it came out in the theaters, sometime in 1999. I concluded then; the payoff wasn’t worth the effort. Been skipping these types of shaky films ever since.

That changed here just recently (a couple of months back) when I purchased, and enjoyed Danny Draven’s newest flick for Full Moon Features; Reel Evil. Reading the back of the Apollo 18 DVD case, I almost backed out; “What you are about to see is the actual footage…”. Glad I didn’t.

As a child, I LOVED NASA and the Apollo Moon mission. I was eight years old when astronauts first walked on the Moon. I witnessed it live with my Dad, at a bar in South Amboy, New Jersey. As much as I was into the outer space stuff, my dear old Dad was into, taverns. Shooting pool, smoking cigarettes, and drinking beer. Any and all-time when he was off work, he’d be in one of the many fine drinking establishments the small town had to offer. I spent more time in bars than one could imagine. When not playing the jukebox, I was watching the television that each one of these alcohol establishments all had. While drinking Coca-Cola, and eating a bag of Wise Potato Chips, I’d watch the news unfold. When at home watching the Moon missions, I’d be on the floor, at least in my youngest days, playing with a popular toy at the time called; Billy Blastoff.

The movie starts off well enough with the filmmaker wanting us to form an attachment to the main three characters. These would be the guys who made up the Apollo 18 mission. A nice job with the film so far. All so far is believable. Stays that way throughout the whole 87-minute sci-fi movie. One has the sense of what you’re seeing as being the real McCoy. On a widescreen TV, the film itself in parts looks as real as what one would expect watching clips from a Fox Television News story. The visual and sound departments both done a bang-up job helping present what we see and hear. Time-wise, it’s the year 1974. Everything looks that way to me. A solid job is done there as well.

I was surprised. There is a couple of scenes where we hear in their downtime, what the astronauts are playing music-wise to keep them entertained; Yes – And You And I. Am not sure story-wise if we’re hearing it being played on a mixtape and it’s just the song or the astronauts brought along the whole Yes, Close To The Edge cassette. Either way, it’s a very effective use of a classic YesSong in a B horror/science fiction movie.

Again…like real film, shot on the surface of the Moon. At least as I would imagine it. Got all details down pat, even the static interference that would affect communication. Except for one key ingredient I can’t mention (spoiler), all seen and heard add for a high believability factor.

Once the film really gets rolling, it’s equal to an above-average 1950’s sci-fi popcorn flick. Rated PG-13, the older kids and parent(s) can make it a night popping popcorn, and getting freaked out by something, that very well could have taken place. Certainly makes me wonder (not really…was fun watching).

Cruise To The Edge
Master Of Ceremonies: Jon Kirkman (www.jonkirkman.co.uk)

Speaking of fun, and certainly, nothing to get frightened about, the upcoming; Cruise To The Edge. May take some additional years before a band like Yes can entertain folks on the Moon. Second best location; on the high seas’. Just a small handful of weeks away before the musical journey of a lifetime begins. Let’s not forget — easy enough to with all this great music being offered — an eight-day cruise to beautiful destinations; Georgetown, Grand Cayman / Ocho, Rios, Jamaica. Leaving this March 25th from Ft. Lauderdale/Port Everglades, Florida. All lovely locations. Defined as a once in a lifetime experience, because it will be. Main act; Yes…and maybe…just maybe…they will play the song heard in the spooky movie, Apollo 18 — from their Close To The Edge album; And You And I.

Cruise To The Edge: wwwcruisetotheedge.com