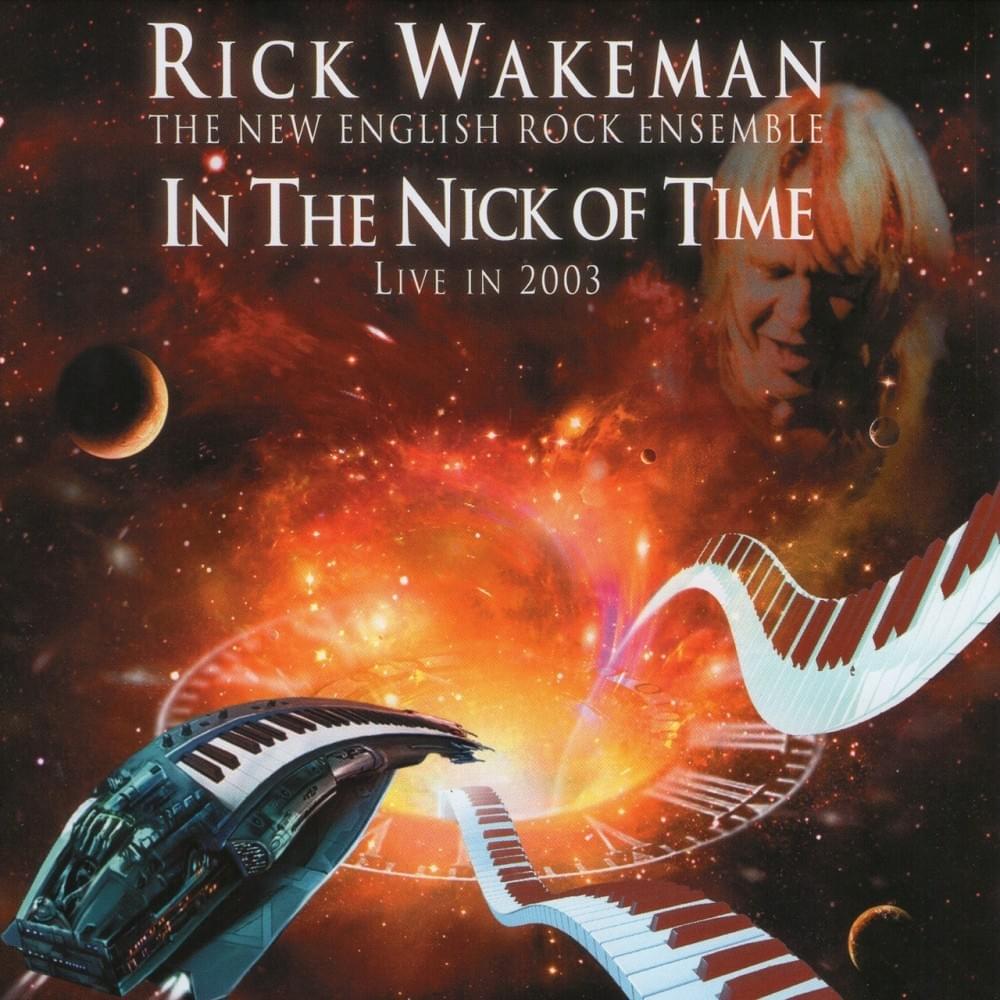 What a cool surprise! Completely under the radar. I didn’t have a clue this was coming out. A concert performed by Rick Wakeman and his New English Rock Ensemble supporting 2003’s Out There – The Movie. When it was initially released, I got the DVD. Another well-done concept project to come out of the Wakeman camp. A few years going by since, and I guess I kind of forgot. The new live CD is a nice reminder to re-watch the DVD one day. That, and also that it’s a perfect concert CD worth many repeat spins.

Rick Wakeman’s a HUGE name in classic rock music. Here I am this semi-new reviewer on the scene. Still, I believe I have the qualifications. I first got turned onto the band, Yes, and its keyboardist Rick Wakeman, back around the year, 1973. I’ve seen Mr. Wakeman perform with Yes on numerous occasions since. In New York City, and here in Houston, Texas. In my own personal collection I have over 30 solo Rick Wakeman CDs, and over 130 Yes compact discs. A good percent of them have Rick playing on them. Add to all that I own and read one of Rick’s books; Grumpy Old Rock Star. A fantastic read by the way.

So put that all together, and hopefully, I’m better than the person who gives the new CD a quick listen, and then writes a one thousand word piece criticizing prog rock in general. Frankly, I read one too many of those types of reviews. So, I did my homework. I listened to this CD, and individual tracks from this CD, SEVERAL times. I’ll be so bold as to say that the following title, Rick Wakeman_The New English Rock Ensemble – In The Nick Of Time, has quickly become of my favorite Wakeman live releases. Now let me tell you why.

Track one is; ‘Catherine Parr/Beware Your Enemies’. A classic Six Wives upbeat instrumental with a new twist. Hundreds of years from now, some young dude will be out there listening and learning about one of the twentieth century & twenty-first century’s greatest piano/keyboard players and composers. In the hood, they would say if sober that Wakeman’s the real deal. Musically, add the guitar styling of Ant Glynne to the mix. There are times on this CD when he simply, rocks. He’s an outstanding player who brings new life to this timeless tune, and the rest of the CD. Together they’re sensational.

The next track, ‘Out There’, is where we pick up on The New English Rock Ensemble’s vocalist; Ashley Holt. It’s the 1970’s all over again. If you had Rick’s must-have solo efforts, then you knew who Ashley was. In the liner notes, Rick explains how Mr. Holt came to the rescue of this tour. At the last minute the vocalist they had, they had not. Very last minute Ashley steps in. I’m pleased with the story, and the outcome of it. Ashley’s voice is like hearing an old friend. Those Winter nights and I’m rocking in front of a fireplace listening to Journey To The Centre Of The Earth. Snow waist-high outside. Ashley’s singing leaping towards me out of the speakers. I’d forget all about the blizzard outside the house. The next song too; ‘No Earthly Connection. His voice is so unique and distinctive, sounding exactly like it did back in the year 1976 when ‘No Earthy Connection’ was first released.

So I’m reading the extensive liner notes/booklet from this CD, and I see the name of one of my all-time favorite drummers; Tony Fernandez. This guy’s work with Rick is phenomenal. Any hole and he fills it. That’s what she said. A drummers’, drummer. Hard to imagine Rick’s solo music without him.

The rest of the CD is solid. Mellow and all beautiful in some parts, and kick-ass prog-rocking out, in others.

One track with roots to Yes; Wurm. Or as YesFans refer to it as, the closing part to Starship Trooper. A Steve Howe piece that he carried over from his previous band; Bodast – Neither Street. If ever lucky enough to witness a Yes concert that included Mr. Wakeman, one would know how he always made the end of that song, truly his own. A pleasant surprise that he would recreate it here. Outstanding bass by Lee Pomeroy. Not only on this jam, but on the whole CD as well. With the Wurm, Tony and Ant chip in as well. Listen hard enough and you’ll pick off some of; Heart Of The Sunrise. Another YesSong that Rick helped make into a classic.

The liner notes are something I mentioned but want to add more about it. Outstanding job !! A booklet, it reads like a mini-book that is authored by Rick. Goes into great detail. Photos that I have not seen before. Nice artwork also.

Plain and simple, Rick Wakeman_The New English Rock Ensemble – In The Nick Of Time, is a solid CD, that’s also packaged well for us fans. A welcome addition to my ever-expanding Rick Wakeman collection.

Uncle G’s Rating: One to five stars. With every play, it just keeps getting better. I’ll give the CD, Rick Wakeman_The New English Rock Ensemble – In The Nick Of Time…5 stars! Brings back old times, yet it’s very much a Twenty-First Century presentation. Glad it was freed from the archives. An instant favorite. Thanks, Rick/All Involved….I really enjoyed it.