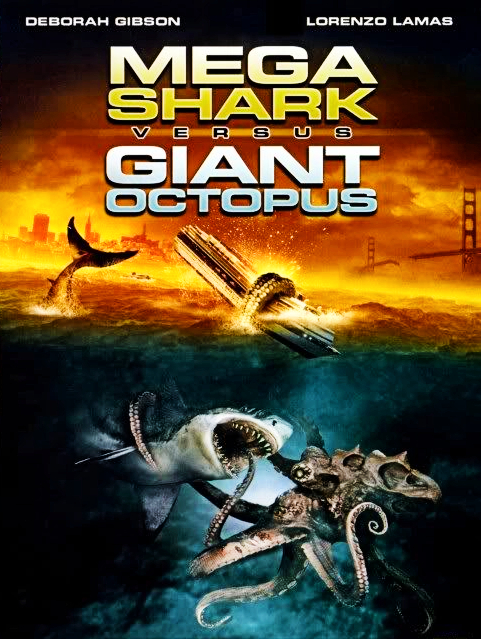 So a few nights back, while looking for something to watch in my DVD collection, I came across this. Frankly, I forgot I even had it. Odds are because it’s not a stand-alone Movie DVD, and is instead part of a collection; Sharks, Piranhas & Monsters – 6 Movie Pack. Got this at America’s favorite retail store, Walmart, and for the incredibly low price of only; $5.00 (8% sales tax in the Great State of Texas = $5.40). A bargain if there ever was one.

This version of Mega Shark Versus Giant Octopus is rated; R (cursing…and Debbie Gibson has a one night stand with some scientist dude she just met — right in the middle of a HUGE emergency where everyone on the planet can die, they stop, go into a broom closet, and proceed to have sexual relations). Yet, no skin scene with Gibson. Which by the way is totally cool. She’s done tasteful nudity before. The woman certainly isn’t ugly. If ever looking thru old Playboy magazines, you’ll sooner or run into all her charms (March 2005 issue).

Tensions mount, as do people in intense situations. Wait…no not really. A love story just doesn’t fit the circumstances. Especially with the man, that she lusts after. Honestly, a woman with her fabulous looks could do much better. Must be into the brainy ones, right? The singer/actress is playing an oceanographer after all. And a horny one at that. She is wetter than a Catagory 5 hurricane. That aside, imagine if you will…Deborah Gibson helping to save the World. Now, stop laughing. Did I say this movie is unintentionally funny? Includes a little comic relief, but it’s hard to tell what scenes are actually meant for us to giggle at, and those they meant to be taken seriously.

So how BIG are these creatures, you ask. In one scene, the Mega Shark jumps up from the ocean and catches a jet airliner in its HUGE mouth. This of course causes the plane to crash. All human life inside the mechanical bird, either meeting their doom inside the digestive tract of the Mega Shark or floating dead face down in the cold, rough sea below.

What tragedy that’s bestowed up on the screen. Disastrous, for sure. No worries, this is an SYFY Channel B movie of the week, brought to us by our friends at, The Asylum. A couple of things that should be known beforehand about this independent film company. The special effects aren’t really that special. Cartoonist and comical are the words that come to mind when describing their CGI effects. There’s a pattern here; film after film. The reality is that some of this looks rather silly. Besides the looks, let’s not forget the acting. It’s stiff. Director must have told them; “just read the lines, and then look like you haven’t a bowel movement in three days.”

Let me state, I really dig that SYFY Channel does this, showing these cheesy movies on the night they do. Reminds me of my youth, and viewing on a black n’ white Tv set, the shows, Thriller or Creature Features, every Saturday night back in the 1960s/1970s. Most of those movies sucked dye cat turds. Very low budget. Still, they had this magic, where no matter how terrible they were, there was still some entertainment value. That what was presented on the screen, being watched with all the lights out in the house (of course), was still fun to get into. Besides, what young teenage boy is there who doesn’t want to see a 50-foot woman, wearing only a towel? Exciting in many ways. Wish our feature presentation was, as well. Mega Shark Vs. Giant Octopus is one of SYFY’s most popular flicks. Shows people are still out who enjoy fantasy disaster entertainment. Now if Asylum would just pick it up a notch. A little less cheese, please. At least in the places where it’s not really appropriate to be.

Rating: Using a one to a ten-star rating system, “Uncle G” gives popcorn flick/B film, Mega Shark Versus Giant Octopus (2009), a solid; Six Stars. If collecting Asylum flicks, it’s a cool addition to the collection. If not anything else, the title of the movie itself, rocks, and the DVD cover art/wrap were done extremely well.