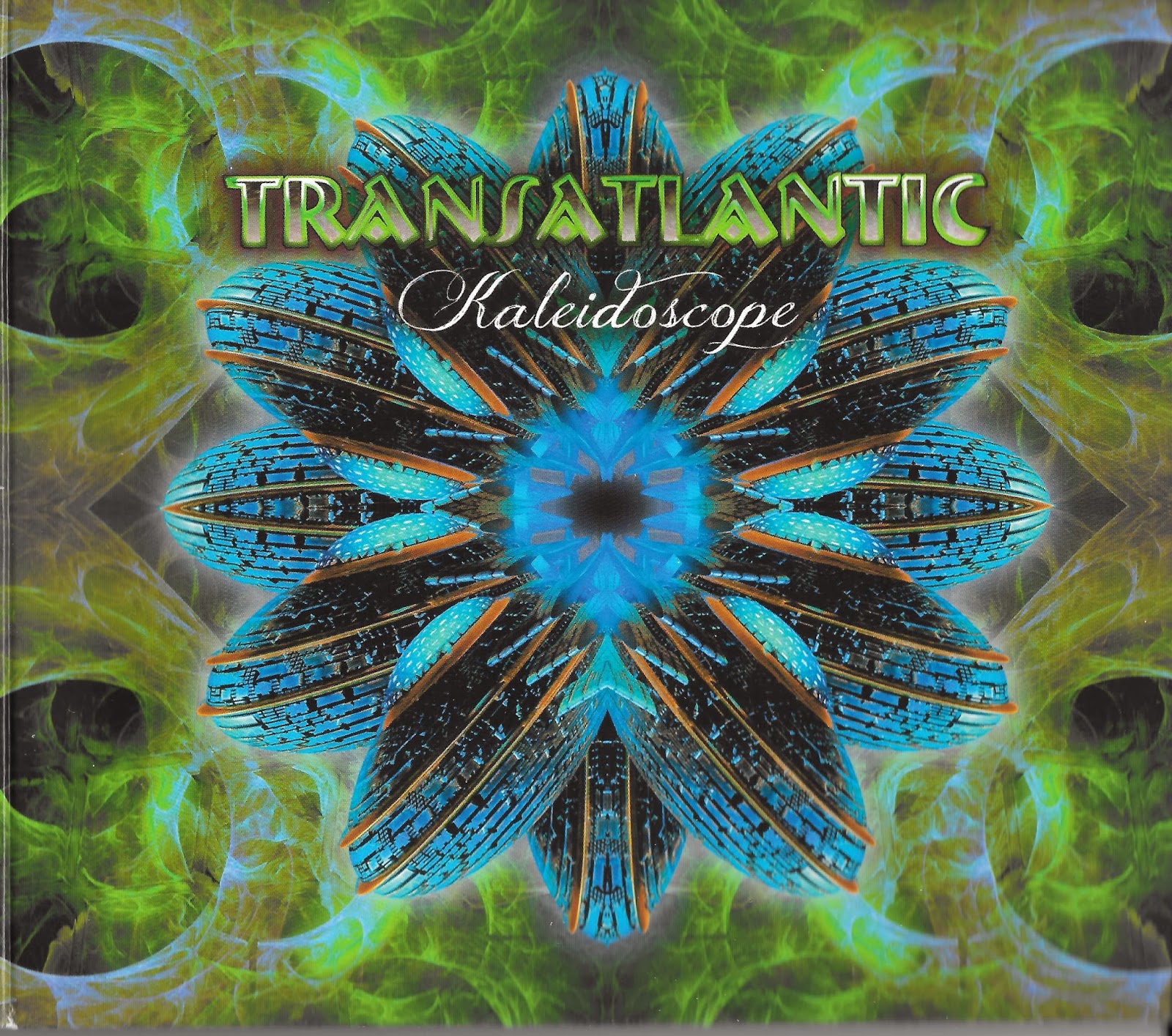 A fresh Transatlantic studio effort to me is a big deal. As soon as I find out a new studio project by the group is coming out, I get excited and can’t wait to hear whatever it is. For me, it’s an automatic buy. And I did just that by ordering my 2 CD / 1 DVD version of Kaleidoscope through the bands’ label via their website, Radiant Records. Not my first purchase from them over the years. Always a pleasure doing business with them. No complaints, and always plenty of parking in the rear.

Transatlantic’s new studio offering, Kaleidoscope, arrived with a songbook that my lazy ass could use if I ever learned how to play the bass my friend gave me. I must admit, it’s going on five years ago at least. I like having the four-string electric instrument and the small amp that accompanied it. I see it every day in my living room, yet never take it out of its black carrying case to plug it in. Here’s the thing, I’m lucky I could play a radio let alone anything else. I was never mechanically inclined. My patience level also is, well…not that high. If I played for a day, I’d have expectations of sounding like Pete Trewavas, a multi-instrumentalist/songwriter, whose position in the group Transatlantic is primarily of bass player and one of four vocalists. Trewavas’ performance and contributions on Kaleidoscope are absolutely brilliant. Forgive me…I’m getting ahead of myself.

I have always fixated on the rhythm section in rock bands. It just so happens that the one keeping the beat in Transatlantic is another outstanding musician, songwriter, and drummer: Mike Portnoy. The story goes; it was his idea to form an all-star progressive rock band. Mission accomplished!! My opinion is they are like fine wine; the band gets better with age. All previous studio projects by this band are leaps and bounds what you hear within the normal confines of general rock n’ roll. This isn’t The Cars (who I really dig and have been into since their early days). One listens to Transatlantic when wanting to experience more than what they get when they pop on their local radio station. Results when listening to Transatlantic music is having fun, and if the mind allows them, much like what a good film can do. One can be carried away to a happy place where feeling content is being surrounded by the sounds heard.

Two other band members need to be mentioned. Both are highly creative musicians. Both songwriters and multi-instrumentalists: Mr. Neal Morse (keyboards, acoustic guitars, and vocals), and Mr. Roine Stolt (electric guitars, vocals, percussion, 12-string acoustic, and additional keyboards). I first got turned on to these gentleman’s music back in 1997. Neal with Spock’s Beard and Roine with The Flower Kings. Two giants in the world of modern prog rock today. A highlight that year for me was being able to attend ProgFest ’97 in Los Angeles, California USA. Both bands played the same night, and get this ProgHeads (for I only assume that is who mostly will read this); along with The John Wetton Band who just kicked ass that night, as did Spock’s Beard and The Flower Kings. I’ve been an above-average fan ever since. I’m never one to take anything to the fanatic stage. Others are out there who do that far better than I. As any other serious music fan that doesn’t tend to take things to the extreme, I have my list of favorites. A common pursuit is I just mostly want to rock. Along the way, I enjoy uplifting music with a seriously wicked beat. This new one from Transatlantic fits like a glove. We have moments like that here, plus lots of other groovy things scattered about. This is what seasoned musicians can do. All four participants publicly display talents that enable them to stand alongside those who rank as the best in progressive rock history.

Track 01: Into The Blue (25:11) I. Overture (instrumental) / II. The Dreamer And The Healer / III. A New Beginning / IV. Written In Your Heart / V. The Dreamer And The Healer (reprise)
Uncle G’s thoughts: The first track starts off quiet with a slow instrumental build-up. By the three-minute mark, we’re into metal prog territory. Blast off!! From that point on, the melody stays in your head long after playing it. The CD contains more killer instrumental moments. Transatlantic takes most of its cues from one of prog-rocks legends, Genesis. Both bands are similar in that their compositions contain just the right amount of vocal and instrumentation so as not to take away from either, but rather complement both. Genesis inspired many, and perhaps more so than others for Neal Morse. His old band Spock’s Beard had those who compared the band to the prog-rock legends as well. All in a good way. Neal Morse is an extraordinary musician whose creativity matches that of Mike Oldfield, Steven Wilson, and Vangelis. A shortlist just to give the reader a better idea. “Into The Blue” is a throwback in part to Spock’s Beard and The Flower Kings. Overall a wonderful composition. On headphones the sounds are crisp, and I enjoy the mix. That can be said throughout the whole recording of Kaleidoscope.

Track 02: Shine (7:26)
Uncle G’s thoughts: Should be in heavy rotation on AOL rock radio. The lyrics are heartfelt. The vocals and harmonies are outstanding. Both subjects mentioned vocals and lyrics, by the way, consistent throughout the album. Shine is the first single off Kaleidoscope. Seeing the video I can say – job well done!!

Track 03: Black As The Sky (6:43)
Uncle G’s thoughts: Awesome keyboard intro and it just keeps getting better. Bass and drums are the results one might think of a Vulcan Mind Meld. Their playing is like one well-oiled machine in perfect step with each other. Just to be expected. My third time now saying this…all throughout the disc.

Track 04: Beyond The Sun (4:29)
Uncle G’s thoughts: A perfect example of musicians knowing when a vocal performance is that good, as to not want to do anything that would take away from it. Instead, they compliment. I can dig the more mellow moments when presented as well as this one.

Uncle G’s thoughts: Dynamite intro!! Modern prog rock at its best. This is what the new generation of prog bands can strive for. Contains all the basic ingredients of a typical Transatlantic composition: wonderful main vocals and harmonies, drum playing capable of giving multiple eargasms to anyone within hearing range, creative and imaginative guitar work, impeccable bass playing, the coolest keyboard parts, solid song structure, mature lyrics…ALL this is the new Transatlantic –Kaleidoscope…and more.

Rating: Using the one to a five-star rating system, Uncle G simply can’t say any more positive things about Transatlantic – Kaleidoscope, which is kind of a bummer because I give it 5 solid stars! Did I say how much I also like the artwork and presentation? A very cool project indeed. The name Kaleidoscope comes from Mr. Portnoy. Worked out very nicely!! It gives off a hippie kind of vibe which fits right into the music that is Transatlantic. Maybe next time a lava lamp?

Note: Kaleidoscope also came along with a bonus disc of cover songs. The band re-done some of the best songs in classic rock history. I enjoyed listening to it. At times, I kind of wished the group especially considering how talented these guys are, would have given these iconic songs a new breath of air, perhaps adding to or changing the style of the original composition. Not enough so the listener can’t recognize it, but enough so to make it an alternate listening experience. Still, an enjoyable disc that I’m sure would be cool, played loudly at home parties on any given night of the week.

Kaleidoscope ALSO came with a DVD. Again, this is the version I purchased. The DVD is an almost 90 minute ‘making of’ documentary. I put it on and was just seriously zoomed in. On-the-spot creative moments that ended up vital to the making and recording of Kaleidoscope are presented, right before your eyes. Like a fly-on-the-wall scenario. It’s absolutely FASCINATING.

In closing, I recommend Transatlantic’s Kaleidoscope to anyone who has a real appreciation of above-average music. Whatever your definition is. Back in the 1970s when I grew up, it was bands like Genesis, original Alice Cooper, Yes, and Pink Floyd out there making what was “art” rock. For those not old enough to remember, was also labeled “head music”. Intended more for the mind, and not just the limbs. It’s a form of music that has been made fun of, but I imagine mostly by people who can’t even play Chop Sticks on the piano. Am glad there are musicians and bands out there now like Transatlantic creating, presenting, and keeping the prog tradition alive.

No paywalls! No insulting or irritating ads! Take your time…enjoy! Bookmark, tell your friends, and keep coming back. It’s FREE! But wait! That said, there are costs to maintaining a website. So before you leave, please donate if you can. And I’ll be forever grateful. Whatever you kindly give, will go towards helping to pay the monthy bills, and or go towards my next…

If interested in talking to me about my helping you with a Twitter page, let me know. Take a look at mine. If not anything else, my page shows sales experience. With a little dedication and focus, YOUR page could ROCK, just as much as mine. Drop me a message and I’ll get back to you. OH…I do charge a small fee. Done via PayPal (secure). don’t let that scare you away.